So i read that the wall street journal published an article here titled I Once was Chic, but Now I’m a Cheap detailing the author’s recent transition to using a Dell Windows computer after a realisation that owning a Mac costs more than your regular PC.

I can agree with that. I do have close friends who owned MAC and it does look cool. The reason why people use macs is most likely

Apple’s resurgence since they almost went dead was great for the consumers, now they are pushing competitors and incumbents like Microsoft to really think about what the consumer wants instead of being the arrogant farts that they always been.

But man, thats alot of higher price to pay for that Apple Branding and the same hardware. I did a brief lookup at Dell Singapore and Apple Singapore and for almost the same high end specs, a Dell gaming XPS will be around SGD 3200 while the same 17 inch Mac Book Pro goes around 4300.

My take for the average urban worker have always been that for word-processing, planning, web surfing and email checking, YOU DON’T NEED a DUO CORE based laptop! A UMPC such as MSI WIND, ASUS EEE or LENOVO S10 at 800 bucks and beow is good enough.

Productivity is important but it has to be balance with sensible spending. I will not get a laptop over 1.5k SGD for these kind of simple work. Laptops to me are an Asset and it is productive but it will depreciate much like the machines in the companies that you invests in.

In the end, evaluate if its worth that much to pay the premium for that Apple Brand.

A couple of years ago, fed up with Microsoft Windows, our whole family switched to Macs. Since then we’ve often giggled delightedly at the commercials portraying a PC as a hapless fat guy in a suit. A Mac, after all, is “the computer for the rest of us,” as Apple’s ads used to say.

We own five Macs, along with iPods and other Apple paraphernalia. But recently, when we needed a new computer, we ended up buying a PC running Microsoft Vista. The reason is simple: Macs nowadays are computers for the rich. 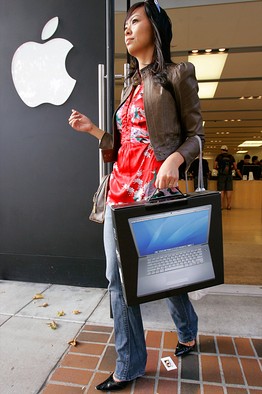 What’s the price of looking this hip?

Like eating only locally grown food or majoring in gender studies at college, Macs have become luxuries that command a premium out of all proportion to their utility — unless their utility is simply to broadcast your own disposable income. For a long time the extra cost of a Mac wasn’t outlandish and seemed justified by its great design and ease of use. Our years of bitter experience with Windows systems involved far too much hair-tearing over random glitches and security problems. To us, going Mac was the price of computer sanity.

But the affordability gap has lately yawned into a gulf. Today, with money scarce, a Mac costs roughly twice as much as a comparably equipped PC — and in my recent experience, the PC performs impressively indeed.

The $646 Dell we recently bought — complete with 20-inch flat panel display and gigantic hard drive — runs superbly, thanks to ample RAM and a discrete video card. Surprisingly, we even like the much-maligned Vista operating system. Windows PCs are more prone to viruses and other malware than are Macs, but Norton Internet Security has proved to be a useful antidote. Once widely reviled as a system-strangling resource hog, this defensive package is now so light on its feet that it operates on our system invisibly.

Re-embracing Windows hasn’t been guilt-free. I’ve been an ardent Mac proselytizer ever since my own conversion experience two years ago. I even got a used Mac for my mother. So I felt bad at first about buying a PC. Yet when I thought about why, I had to admit that the reasons were Veblenseque. We like to think that we’re pretty cool at our house, so getting a machine running Windows seemed downright plebeian. But doing so helped me to realize, in turn, the extent to which “cool” is too often connected with “cash.”

It’s cool, for example, to spend a fortune on solar panels or hybrid SUVs that will never pay for themselves in saved energy, even though the money could do far more for the environment spent in some less ostentatious way. Shopping at Whole Foods is cool, as is obvious from the hipsters in the aisles — and the high price of the groceries. This kind of cool disdains luxury labels like Rolex and Coach yet works just as hard to impress.

Most of the cool people I know use a Mac. My sense is that they like to think of themselves as egalitarian sorts unencumbered by snobbery — rather than, say, brainwashed cultists obsessed with class-signaling. Yet at today’s absurd prices the Mac is even less than ever “the computer for the rest of us.” Instead it’s a well-designed status symbol for the elite — another way that people with money can distinguish themselves from hoi polloi.

The current financial crisis has many causes, but surely the death of thrift has been among them. If there is a silver lining to the grim economic news that besets us daily, it may be that cheap will once again become chic. The sudden popularity of netbooks — tiny, low-cost, portable computers that focus on the basics — is a case in point. People are discovering that they don’t need to spend $1,500 on a machine to send email when a $350 netbook will do the trick. If we keep this up, we may all soon find ourselves living within our means.

There’s no sign of such a cheap little device from Apple, and I’m not even sure the company wants customers like me and my family. Recently it announced a new 17-inch laptop that starts at $2,799, enhanced with a longer lasting battery and other neat features. But Apple left its cheapest computers — the Mac Mini line — unchanged despite puny hard drives and scant RAM compared with competing PCs.

Apple has put a lot of effort into getting customers to “switch” in recent years, and my entire family did so. But a couple of our Macs are going to need replacing in the next year or so, and much as I find Apple products to be well designed and fun to use, we’re going to switch back to PCs unless Mac prices come down. Cool just isn’t worth it anymore.