This morning Sunday Times published an article on a less painful way to invest.

The feeling I get at the end of this article is that it encourages more market timing rather than having an investment plan.

If you don’t have an investment plan and pre-committing to it, you are kind of investing blindly.

So this article was written by Jessica Cheam which talks about whether to use dollar cost averaging or lump sum investing.

This is a tried-and-tested formula, but a study last year by mathematics majors at mutual fund giant Vanguard put paid to this theory by offering evidence that it is better to put your money in the market all at once.

In the study, entitled "Dollar-cost averaging just means taking risk later", the firm took two sums – $1million and $20 million – and compared the historical performance of investing these amounts in dollar-cost averaging versus lump-sum investing across three markets – the US, Britain and Australia.

Their main finding: The longer one took to invest, the lower the return.

On average, they found that the lump-sum approach outperformed dollar-cost averaging about two-thirds of the time. This finding is consistent with the fact that the returns of stocks and bonds exceeded those of cash over the study period in each of these markets.

But if the investor is concerned with minimising downside risk and potential feelings of regret (from investing a lump sum immediately before a market downturn) then dollar-cost averaging makes more sense.

It warns, however, that this choice should be weighed against the fact that returns of cash are lower than returns of stocks and bonds, and that delaying investment is itself a form of market-timing – something few investors succeed in.

There is a psychological problem that if you have 100k, plunking it down at once will cause you to lose money.

In the case of my friend, who chose to DCA 2 months before the top of the 2007 market crash (read I DCA at the market top), what Jessica said makes much sense.

The top was at 3800 and after 6 years we are neither there. I have not done any simulation of  what happens if he invest with a lump sum back then, but I believe my friend’s result won’t be pretty with dividends factored in.

Delaying your purchase into stocks but sticking to a regular purchase schedule is better than trying to time the market with a large investment.

She seem to be basing her experience on what she had gone through. Now what happens if she purchase her blue chips in 2010 lump sum? or the 2011 correction?

Could she have sung a different tune?

There seem to be a cognitive flaw in the way she reads her “mistake” in that fear is rationalizing that she should not do this again.

I wished I had given more thought to this strategy when I plonked all my spare cash into a couple of blue chips about a month ago when – now with hindsight – the market was oversold.

With no extra cash available, I grimly watched my investments sink deeper and deeper into the red as the market sell-off began when speculation over moves by the US Federal Reserve to taper its stimulus began to take hold.

I did the next best thing: I waited for the market to rebound slightly and then I sold my positions at a significant loss. It pained me, but at least this enabled me to reclaim my capital, and now, I’m waiting for further market corrections before investing again. And this time, I won’t be investing all of it.

You guessed it, I will be investing in smaller chunks instead, at regular periods of time. This way, I stand to gain from the biggest benefit of the dollar-cost averaging strategy – minimising regret.

There is a difference when you actively invest in individual stocks (in her case blue chips) versus a unit trust or a ETF.

You can dollar cost average into a fund that is unlikely to go to zero. Markets have a way of overshooting on the downside.

Take the case of the emerging markets, the India and China doom and gloom.

Because it’s a basket of stocks, the risky individual stocks that blow up will be replace by better quality ones. Funds seldom go to zero, or permanently impaired.

When things have a tendency to go up generally over the long term, dollar cost averaging is better psychologically for most people, unless u have a strong sitting power.

But when it comes to individual issues, fundamentals do change. Good companies may face declining economics that permanently alter their future earnings capability and thus affects their future price.

If you DCA into a lost cause, it is unlikely that they will end up in a good state in the future.

This article seem to say that blue chips will not die. I hope she did not plonk into NOL then.

What is important is proper valuation of the company 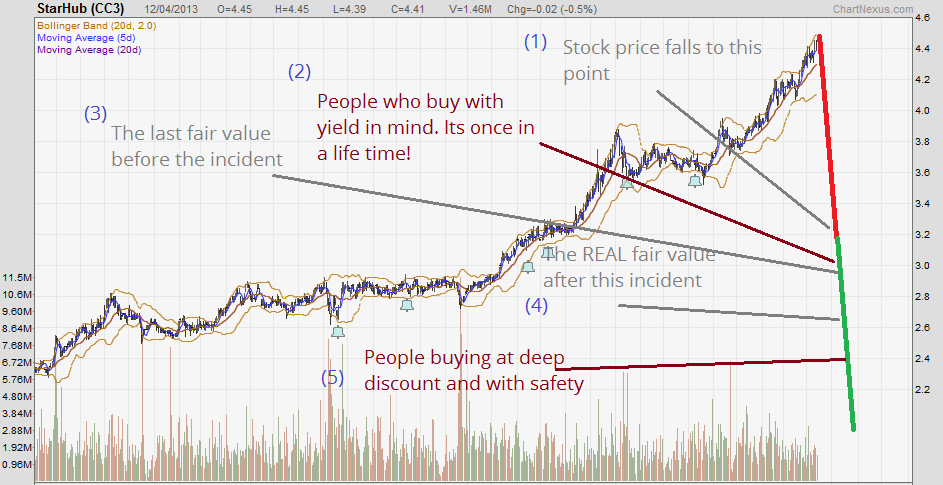 Without knowing the rough intrinsic value, and making use of what technically oversold indicators,  you may still start buying at a high price!

If your valuation skills are not up to scratch breaking it to a few portions and investing based on percentage drawn down make sense.

But the stock could be oversold, and then after consolidating for a week, still head down.

If a proper valuation is carried out,  your purchase would have a high margin of safety, and baring any unknown risk not  buffered into your value,  it should eventually trade higher.

I am not against market timing, but somehow this article doesn’t seem to be highlighting the differences correctly.

If you know the value of an IPAD, you would know what is cheap or not cheap.

You wouldn’t worry if its oversold or not.

If it gets cheap you will just buy it.

Not all of us can visualize investing in that context.

If there is one lesson I gather from this article, it is really how we sometimes cannot take the psychological impact of seeing our money losing money in the short term and not doing enough homework to have a high conviction in our purchases.

Some past commentary on similar issues: