Someone who looks at the indicators and have been deflationary for a long time suddenly switches to become very sanguine a few years ago. Listen to his view currently.

David Rosenberg is mostly known as a bear or a tilt towards being bearish in recent years.

His recent tilt is not so much bearish but a 360 degrees shift from deflationist to yield whore.

Recently he released a series of interesting charts for the year of 2013: 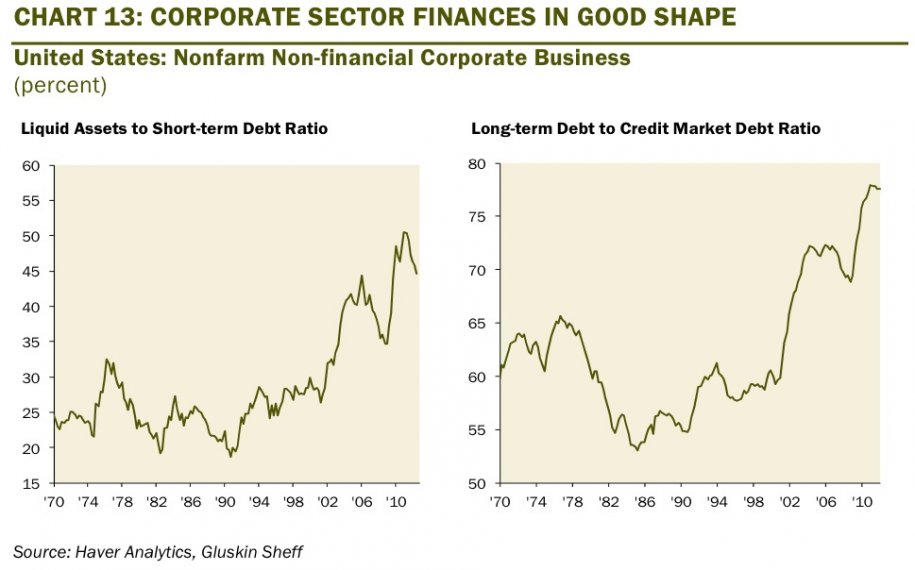 Rosenberg is of the opinion that non financial corporate sectors are doing ok, which is a positive thing. 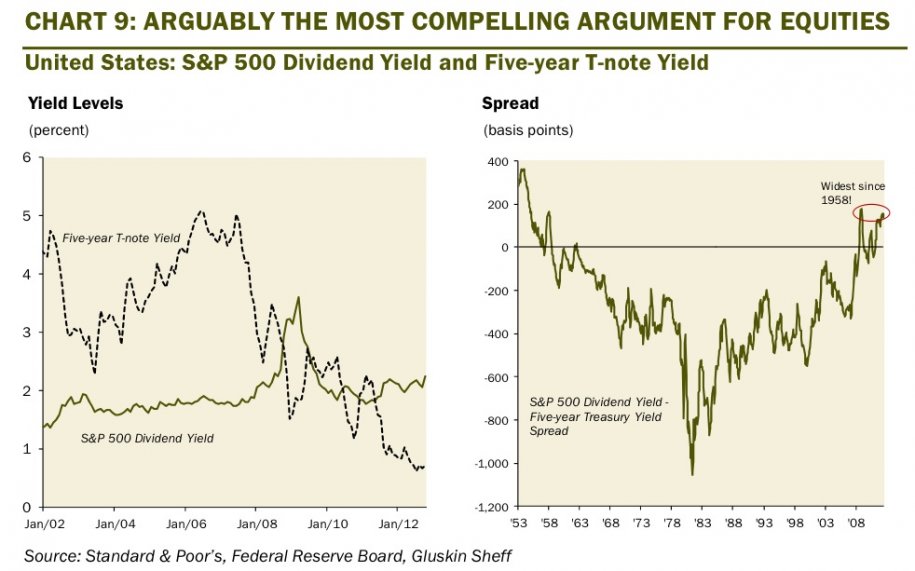 There is a shift in the yield of equities versus medium term bonds so much so equities are yielding more than bonds. This probably one of the reasons equity looks a better value proposition than bonds. 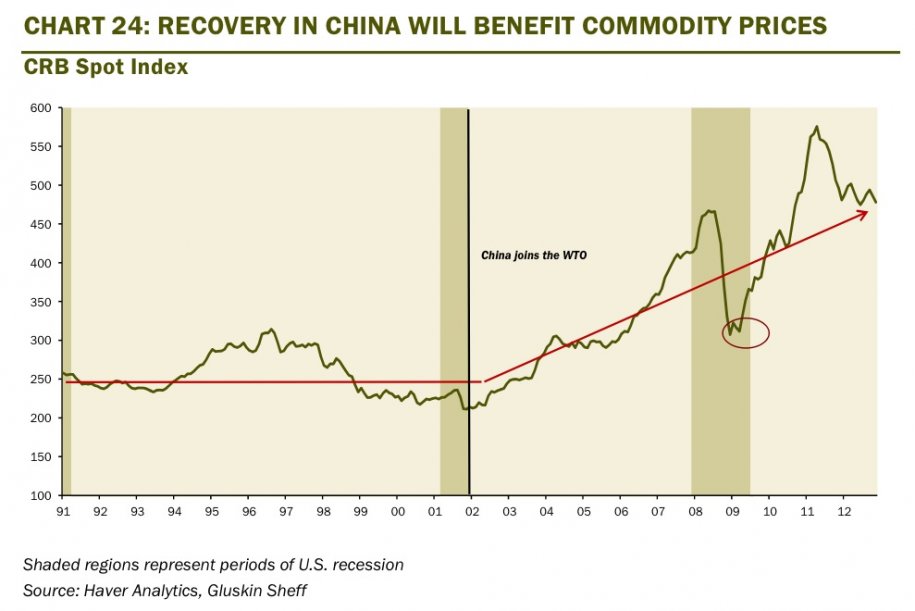 Commodities depend largely on the performance of China. When China stabilizes, commodities are likely to turn. 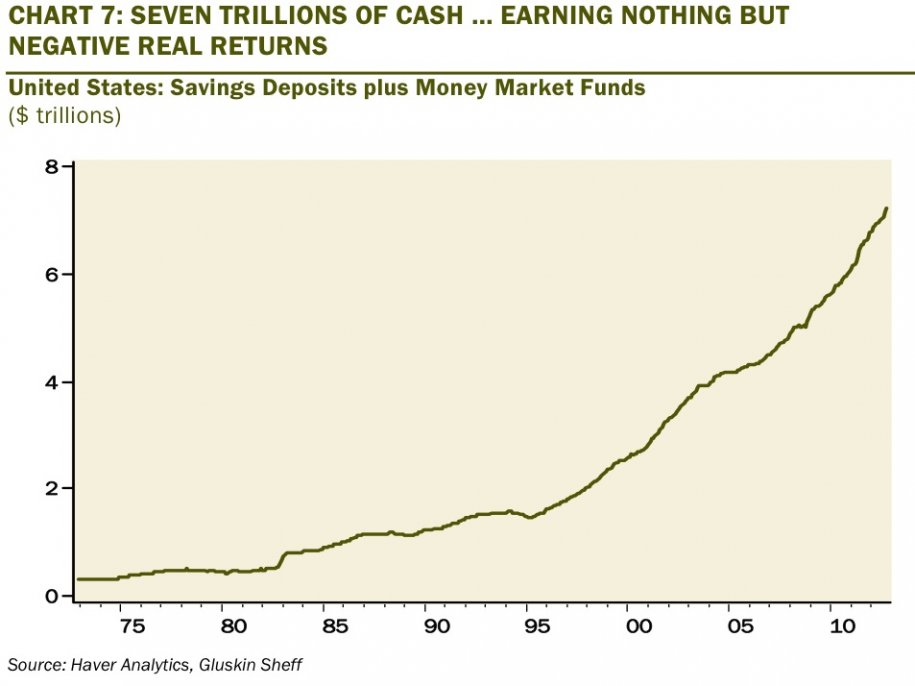 This chart shows the amount of safe haven money. In an environment with an adequate interest rate, this may look ok, but when its earning next to nothing, what happens when some of it flows to other asset classes i.e. gold, commodities, equities? 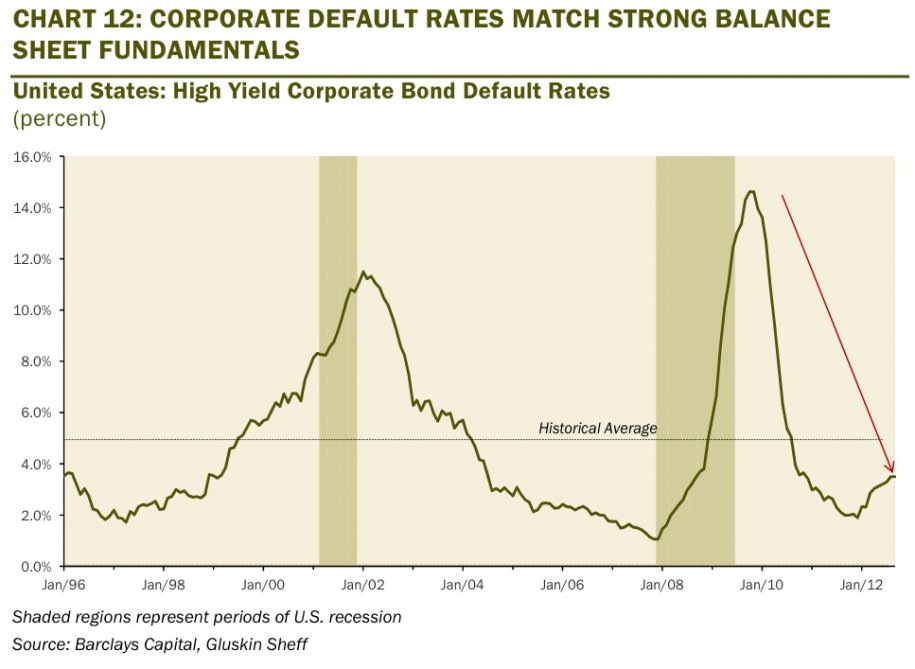 Because of low borrowing rates corporate defaults have been very low. 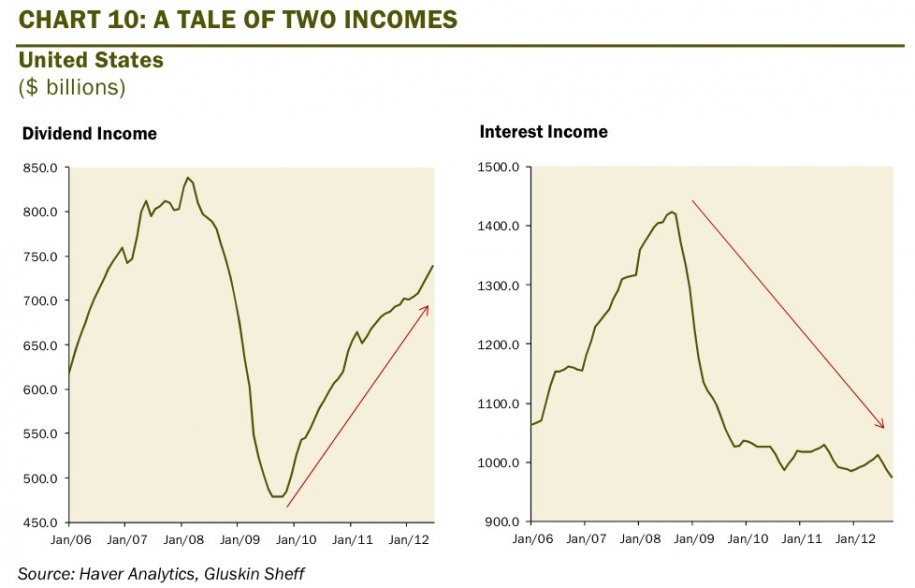 Dividends are up 8 percent over the past year and 55 percent since august 2009 while interest income growth is down 2 percent in the last year and 30 percent from its peak in august 2008. 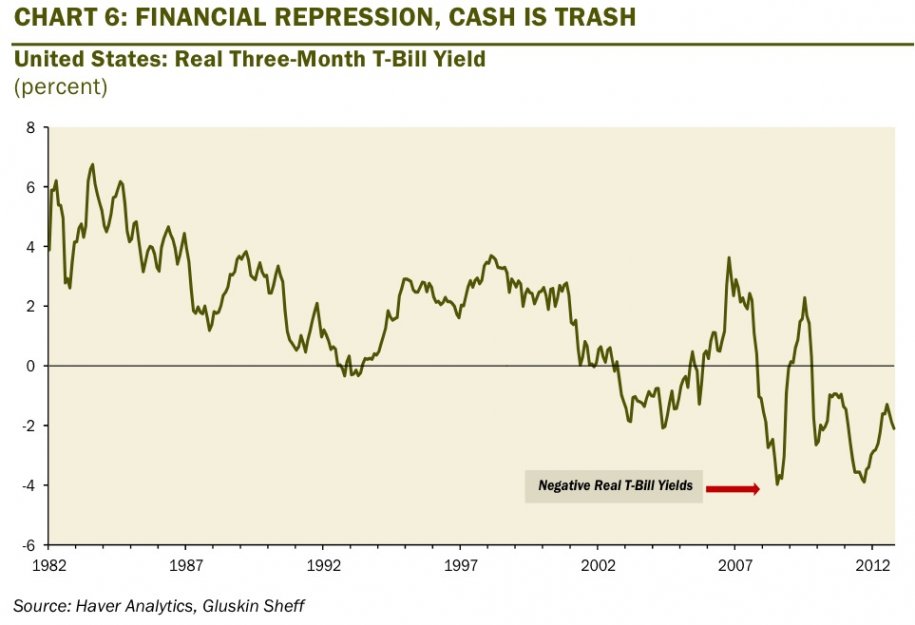 Again, cash is losing to inflation. 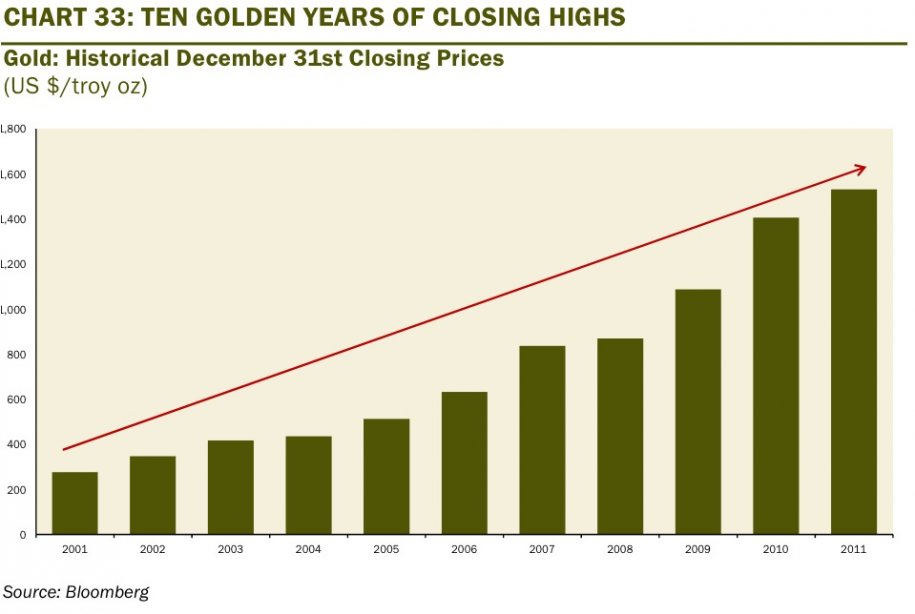 Gold have been a great investment. Viewing it as a currency, it looks to preserve your purchasing power. 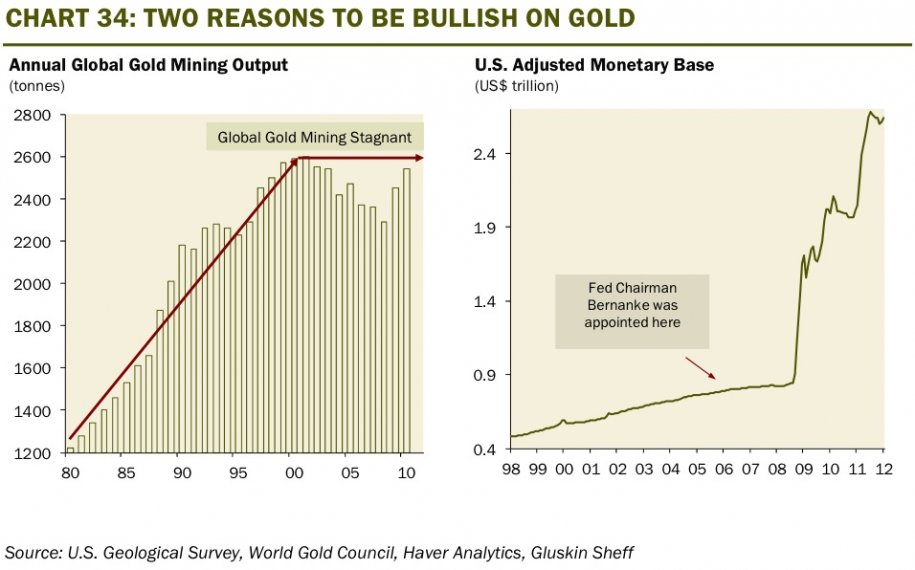 And what could help it further with low rates, shadowy inflation is that gold mining have stagnated. 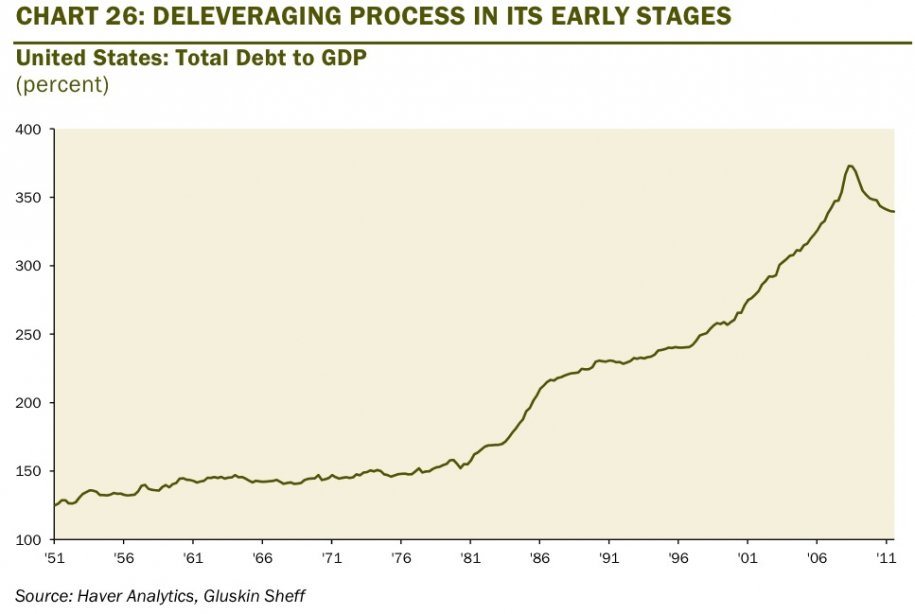 A combination of austerity and quantitative easing looks to be helping, but not to an extent where we have correct all the problem. 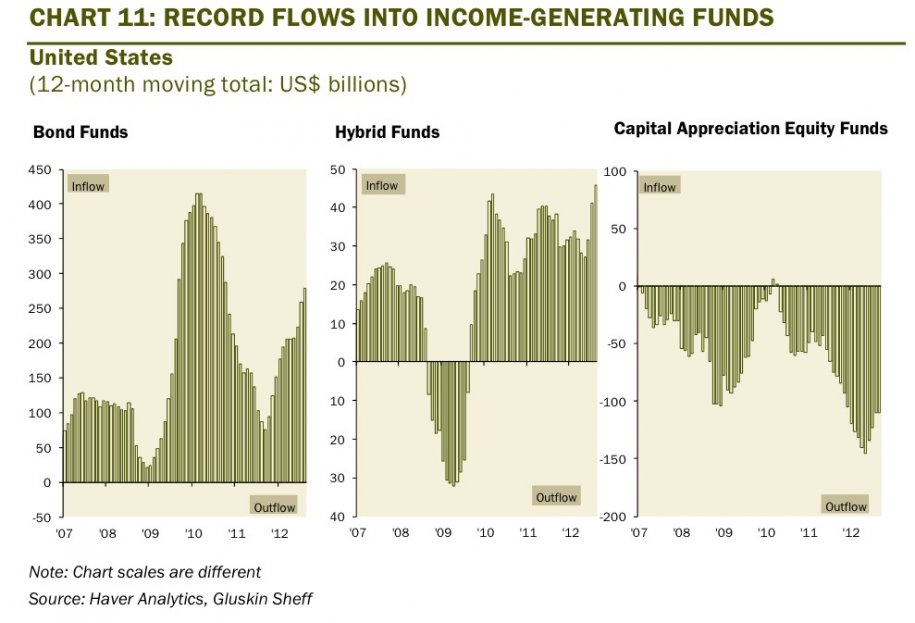 Can equity be so unloved since the great collapse? 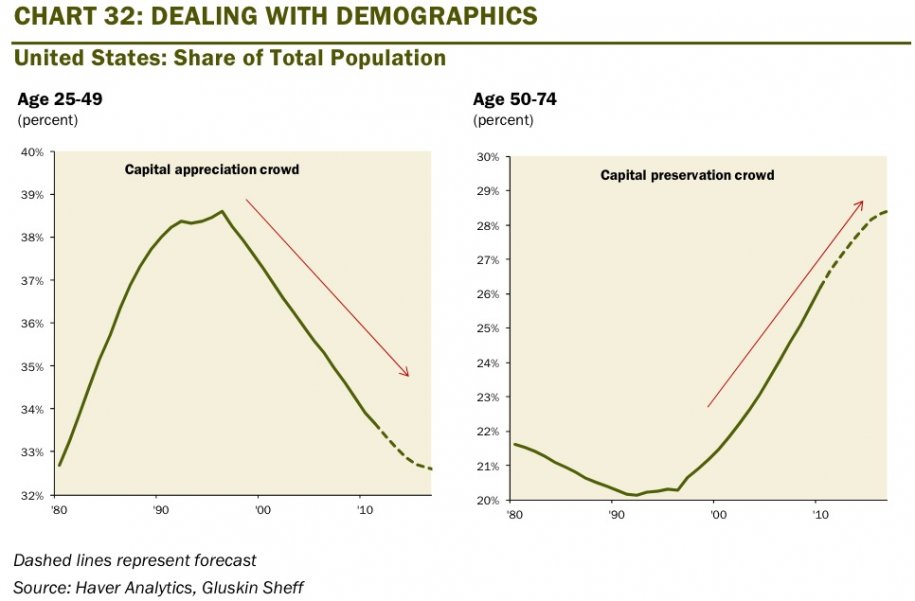 Another freaky chart. Equity Secular Bear since 2000. Those that are suppose to accumulate for appreciation are not doing it.

All this points to a preference for dividend yield and dividend growth.

All this points to his thesis of

In addition, recent commentary have pointed to people being tired of stocks and have given up on it, which is a good position to be in.

There was a gathering of the great minds of investing this week brought together by Barry Ritholtz. Amongst them is David Rosenberg.

Attached is his slides