A friend asked me how do you teach kids about money. I don’t have kids, so this is not something that crossed my mind. I read a fair bit on the subject, but I do not just want to provide a list of to dos and do not dos.

So I tried to deconstruct, how is it I got to this point, and how as a child, what influenced me to have rather sound money relationship.

My parents didn’t have a lot of money when I grew up. We had enough, but we were rather lucky that due to  some string of events, they manage to make me conscious about money.

If I were to think of why I would continue to save money, I place a lot of weight on the motivation of meaningful savings accumulated and the consistent action of going to the bank to put money away.

The motivation of meaningful interest on bank savings

This is my old bank passbook. In the old days, we didn’t have the internet. If you want to deposit money you need to go to the bank. This was around when I was about 5 to 15 years old. 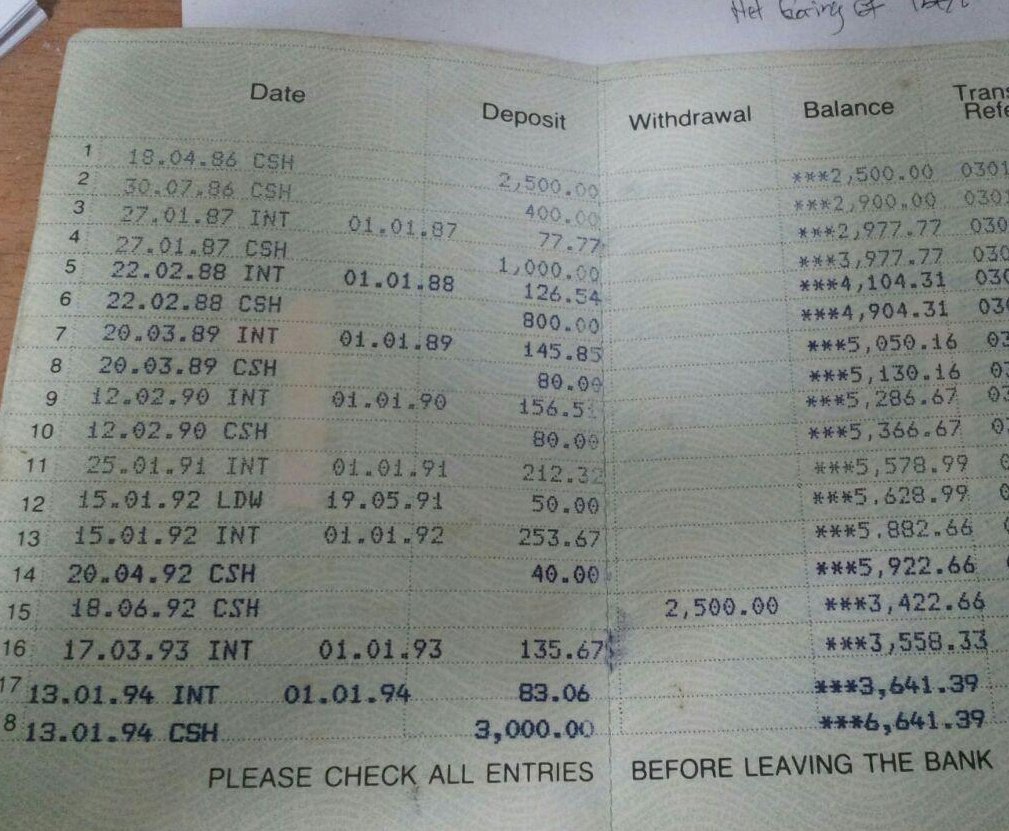 My mother deposit some money into our joint account, before I even know what money was. The sum was not big, but later in life, I realize it wasn’t small either with our situation.

Since she trusted me to go to the nearby market by myself to update this pass book yearly at around the age of 12 or 13, I been looking forward to such a trip.

What motivated me was seeing the interest earned.

At that time, I probably don’t understand the power of compounding, what is percentage interest, or have developed my wealth formula yet.

At that time despite the deposit sum to be $3,000 or $5,000, the interest earned was rather significant for a kid. Now that I know how to calculate the percentage of interest the % earned is as follows:

When you are young and you start seeing hundred of dollar accumulate, you tend to look forward to it. Each trip is an anticipation of how much, by letting the money sit in there, it is able to earned.

The habit of consistent deposits

Seeing the interest earned was important, but what was also important was the act of getting me to consistently go to the bank, queued up and deposit money.

Back then OCBC had ran a very successful young savings program.

So when you deposit money and reach certain milestones, you get some nice gifts for kids.

Hindsight that was kinda lame, but hey as a kid, you think rather differently.

The consistent, repetitive exercise of deposit money, makes me think that depositing money was a norm, or something that was necessary.

It was a success for me, not so much because my parents made me understand the importance of money, but through luck, the actions managed to motivate me with the right money values.

Blueprint that let’s you get Started to mode your Child

I think you can do better than my parents. They had an accident with their children and the children turned out better than expected with how they handle money when they are older:

Making simple but early decisions can create powerful after effects many years on.

1. Split the allowance into 3 Jars: Spend, Give, Save 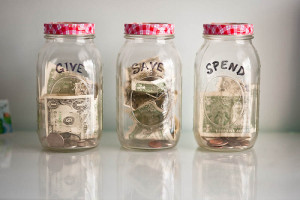 You might need to provide more money for your child’s allowance but the values built should be worth it.

Ron Lieber in The Opposite of Spoiled explains this. Micheal Kitces have a good write up here.

Lieber suggests that when children are started with an allowance, they should be guided to split the money into three groups – one for Spending, one for Saving, and one for Giving – literally, by having three clear plastic containers for each. Younger children can simply split the allowance equally amongst the three containers. With older children, having a discussion around how much to allocate to each is particular part of the values-teaching opportunity. A “typical” weekly allowance might be $0.50 – $1 per year-of-age of the child, starting around kindergarten, and increased each year on the child’s birthday. (If you want to give somereward to children for work, over and above their allowance, Lieber tells the story of one parent who pays “extra” for children who spot additional/new problems and come up with solutions, as a form of teaching entrepreneurship.)

The Spend jar is, as implied, for the child to spend. Aside from setting certain items as forbidden (e.g., certain toys you just don’t want in your house, even if the child bought it themselves!), the idea of the spend jar is to give children the latitude to make their own spending decisions, even “bad” ones. Guiding children about their spending is an opportunity to distinguish between wants and needs. For older children, they can get even more flexibility; for instance, let a high-school-aged child have their entire clothes budget for the school year in a lump sum up front. Either they’ll learn to manage the money to make it last throughout the year and teach themselves a financial lesson, or they’ll mismanage the money and be stuck wearing their “old” fall clothes during the spring school season and learn perhaps an even better lesson about the consequences of mismanagement. Better to learn in the “controlled” environment of school, than after they graduate from college where the consequences of mistakes are more serious.

The Save jar is to teach children the virtue of saving, and the benefits of perseverance and patience in allowing the balance to grow. As Lieber notes, having the plastic “Save” container be clear is important for having the child be able to actually see the dollars increase (similarly, Lieber suggests that opening a bank account for the young children is less effective, because it makes the saving a less tangible lesson). As the Save container grows its balance, parents can help children formulate goals of what they’re saving up for, and then celebrate with them when the goal is reached and the purchase can be made. This is also an opportunity to teach kids about growing savings and compound interest – e.g., by paying them an interest rate on their Save jar. Just be careful that the compounding doesn’t get out of control!

The last container is the one for Giving, and is an opportunity to teach children about the value of generosity and giving to those less fortunate. Helping children decide what charitable need or cause to give to also provides teaching opportunities, and Lieber notes that many charities will work with parents to help children who are going to do their giving in person – so you can take the child in to the facility, from a pet shelter to a homeless shelter, and let them see the impact of their giving.

2. Monthly or Bi-Monthly Deposit the Money from the Save Jar into a bank account

As parents, do not save the hassle and help your children deposit the money. Banks are set up differently nowadays. However, you can still bring them to the bank kiosk or the physical bank and let them participate in depositing the money that they have accumulated in the Save Jar.

This way they will build up a saving habit.

Gone are the days where normal (note: not fixed deposit) interest is 3 to 4%. Current interest is like 0.25%. The interest yearly will not be meaningful enough to make an impact on the child.

However, there are other wealth building assets that can replace this.

A note is that these wealth building assets can be volatile (except for the Singapore Savings Bond), so you might suffer capital loss in the short run. This in itself can be a lesson for the child as well!

You might need to seed $5,000 in one of these instruments and review with the child on an annual basis. This is a manageable time frame to teach the child that the value of the asset changes from time to time, but that should not affect the asset.

It allows the child to see the interest/coupons/dividends earned accumulate.

To review, you might need a spreadsheet to track the asset. You can make use of the stock portfolio tracker that I created. You can learn more about it and get it here.

4. When your savings compound

The last ingredient in the child’s prep, is to show him or her that, while putting money to savings is good, if the savings can compound at a greater rate of return, the eventual goal can be very substantial.

It might be enough to motivate him or her to work towards it.

The following table is a good start of how a 15 year old, who kick started some savings allowance from summer jobs and parents, then from putting away part of his or her take home pay can accumulate different amount of wealth at the end of 45 years old.

(note: if you would like the following spreadsheet, you can find it here. Go to File > Make a copy and play around with it) 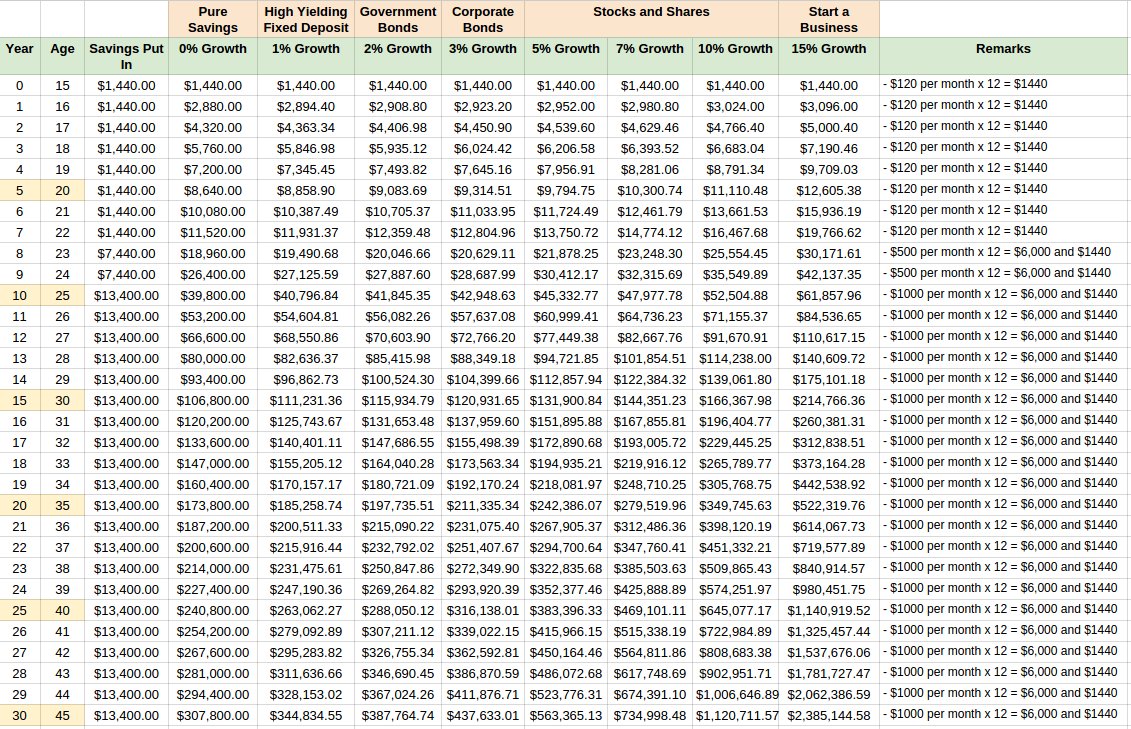 While it is good to save, growing at different rates provide different results. 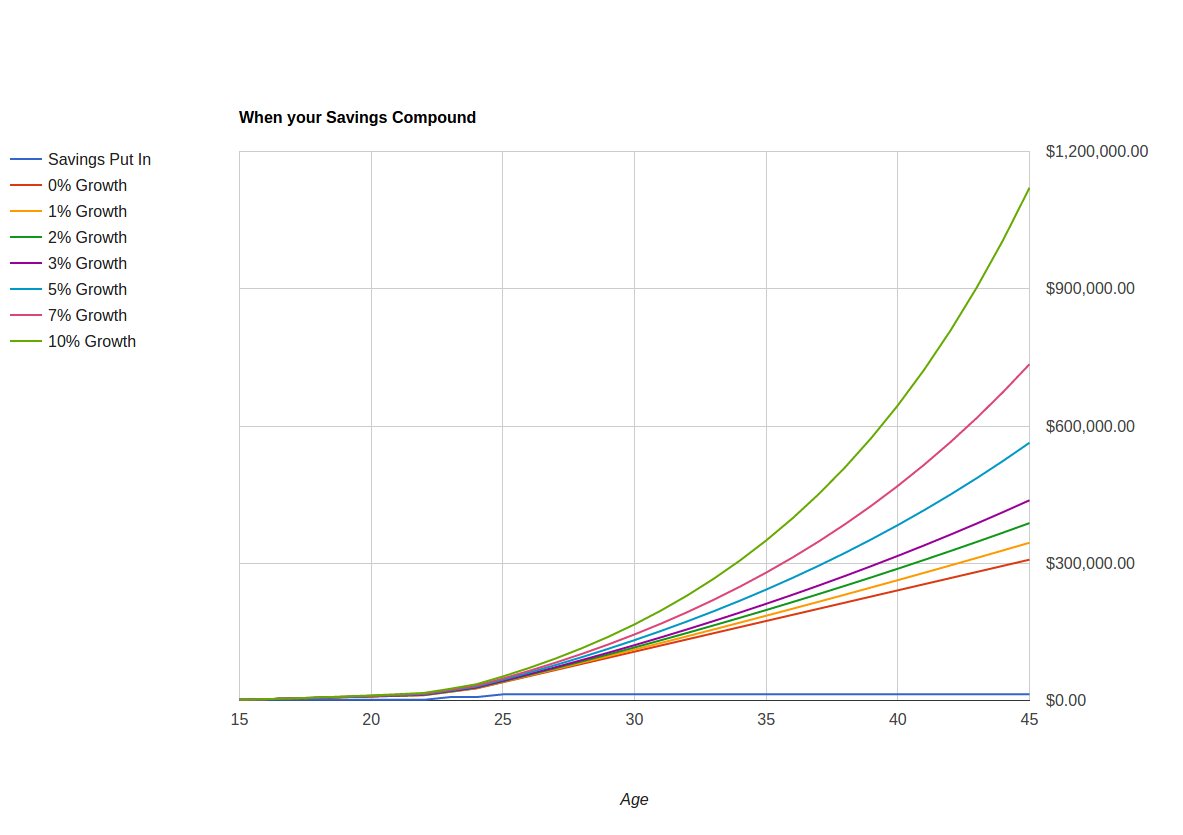 I hope I have leave everyone something to at least get started. The problem with sticking to a plan depends much on various factors. Some parents force things on us, while some take the pains to explain everything.

I prefer to see if we can keep things simple, make it part of the daily life, provide enough facts and data for him or her to become wise about money.

What lessons do you learn from deconstructing your child hood relationship with money, or in your experience teaching your kids about money? Do share with us.