As investors, we would like to know whether now is a good time to purchase investment properties, or find a dwelling to build our home habitat.

We want to refrain from purchasing our flats at relatively more expensive prices.

So we based on what we can remember whether prices now is more expensive or less expensive than in the past.

Price is not always a good gauge on their own, some other metrics such as:

Still, many have recency bias.

They think that they remember when prices are damn high or damn low.

Sometimes, I think it is better to look at the data quantitatively.

I have summarized 3 segments of housing index data, to give you a good glimpse of how Singapore housing prices have ticked up and down over the years.

The following table shows how the price index changes for the non-landed from 1975 to 2014.

This is for non-landed, which typically applies to your condominiums. 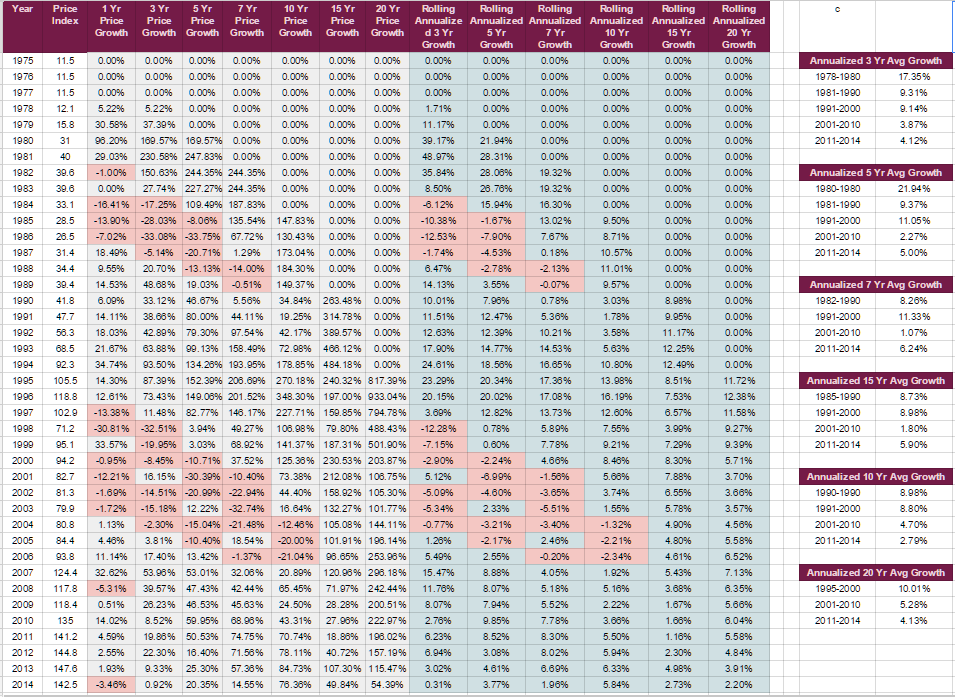 There are 3 sections to the table.

The first is a 1 year to 20 year price growth. Each cell shows the price changes from the previous (not going forward) x years. So if you see at 2004, the 3 year price growth is -2.3%, this means the price difference from 2001 to 2004. This is not annualized. It is the absolute amount.

The second section is Rolling Annualized 3 to 20 year price growth. This is the annualized figure compared to the previous section. So for 2004, the 3 year annualized or compounded growth rate have been -0.77%/yr.

The third section, or the table to the right, shows the Annualized Average growth for different 10 year periods. This gives you an idea of which are the more lucrative and successful property price appreciation decade. Note: I apologize for the headers for 10 and 15 year annualized average rate. The data for the 10 year is suppose to be 15 year and vice versa.

There are not many large non landed property home price declined except…….

If you look at the data for 1 year, the largest one year price declines are:

Other than that, prices have been psychologically bearable. Perhaps that is why people like properties in Singapore more than any other things when they decide to build wealth.

If we look at 1 year price decline, there are only 5 unbearable years, but they do tend to cluster together.

This becomes useful when you war-game and plan for your condo purchase.

How large a decline can you psychologically take?

There are periods where 10 year price growth is negative

There are some crazy returns where the property appreciated 270%, but if you are the pessimistic sort, there are 10 year period where your price appreciation is negative.

Do you have that kind of holding power to hold for so long if you have sunk cost fallacy?

Annualized Growth Was Astounding in the Past

When we are a country that is growing, you can see how well property prices rise with the improvement in the economy.

If we look at Annualized 5 year Average Growth, you can see the average annualized growth was astounding at 22%/yr but eventually went down to 2-5%/yr for the recent 2 decades.

If we look at Annualized 7-20 year Average Growth, the early decades produce an outstanding equity beating 8%/yr return which in recent decades is down to 3-6%/yr.

I draw the conclusion that some of the past long term returns may be challenging to replicate.

Price data does not include Rental Income

And since they do not include rental income, had you bought an investment condo and rent it out consistently, your returns would have been greater than this. 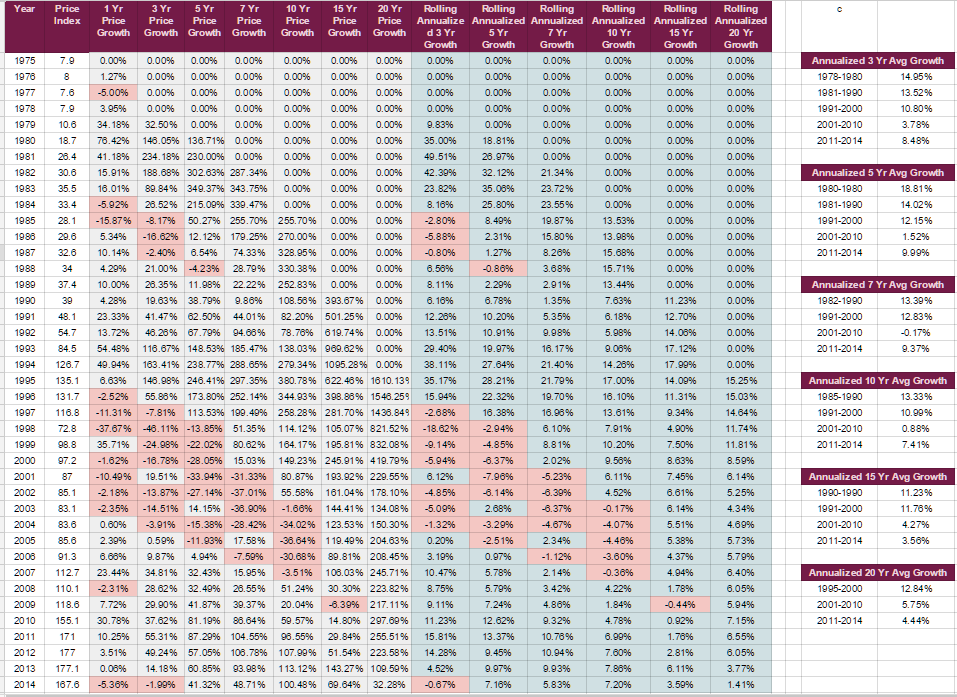 You can see that the price cluster is almost the same as non-landed. 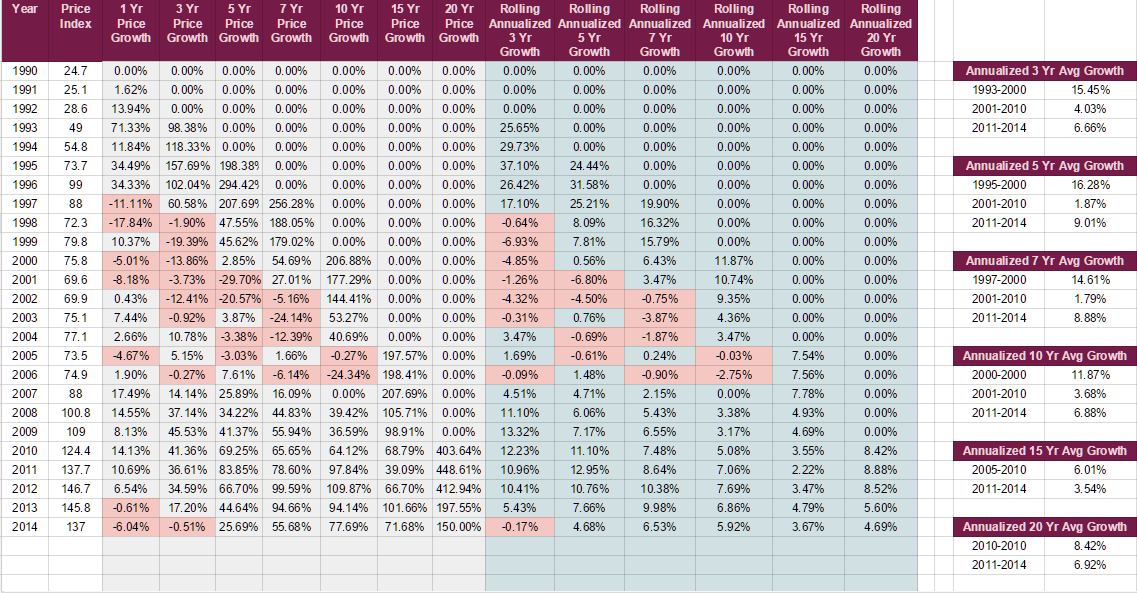 So it is comforting that most of us stayed in HDB flats.

The average annualized price growth have been great as well, except for the decade of 2001-2010 (same as non-landed and landed private properties)

Buying and Holding Properties Smooth Out to Long Term Returns

As a bonus, the Edge Magazine publishes the Caveat for some of the most profitable and unprofitable transactions of private properties.

We can learn something from the data as well. 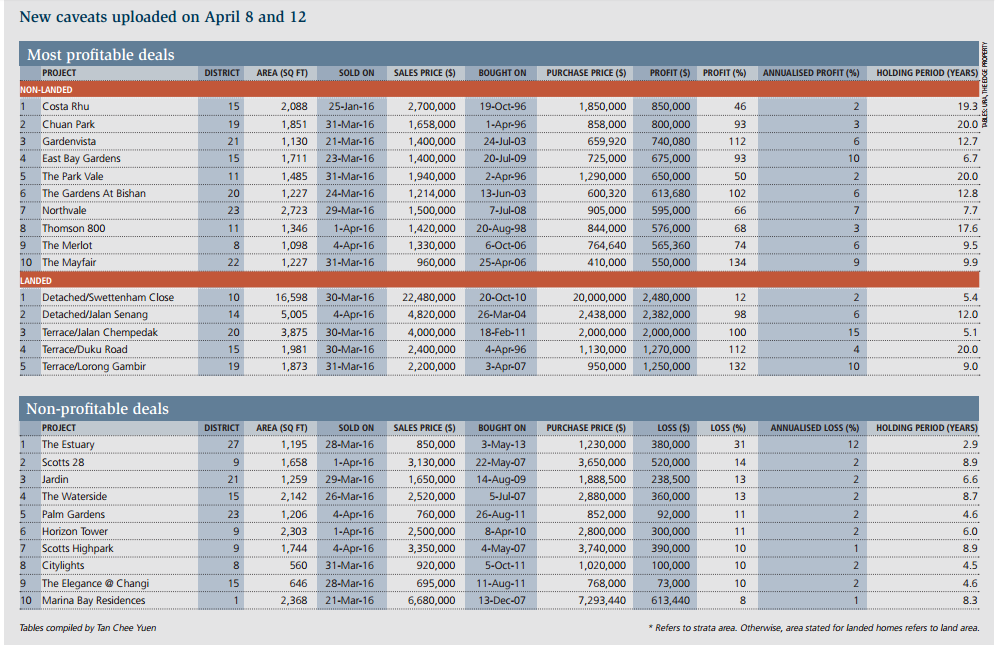 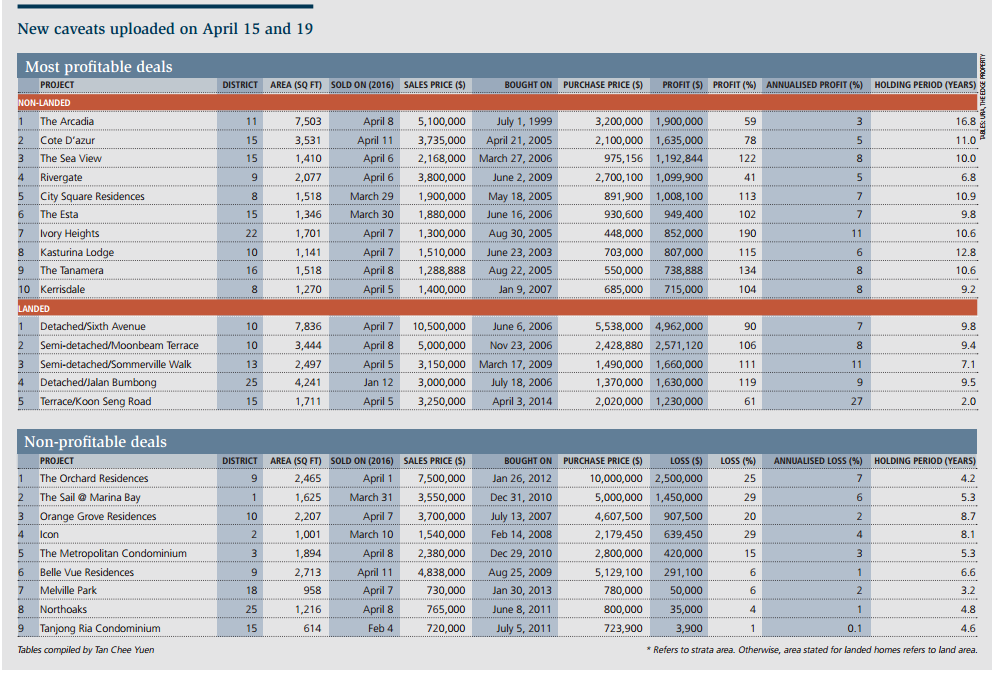 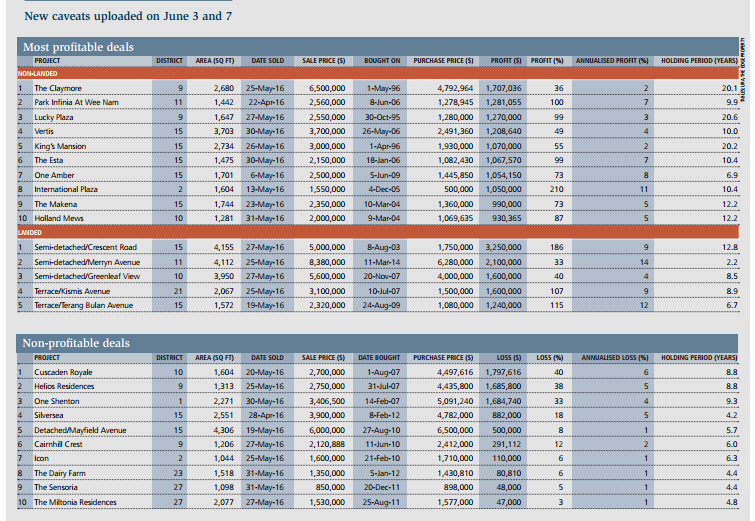 If property is like what we always say, that you can safely buy at any prices, then we won’t be seeing folks liquidating their properties at 20-40% losses.

Granted, people tend to be more risk seeking when they are at a loss, waiting out to see if the losses will turn out well.

Longer Term Buy and Hold versus Less than 10 year Holding

If we look at the 3 caveats, you will notice that, when the holding period is 15 years and above, the price moves close to Singapore’s inflation rate, which is 2-3%.

Most of the great annualized appreciation occurs if you have the foresight, or lucky to purchase during 2004-2010.

Property moves in cycles, and like a lot of wealth building financial instruments, they go through periods of euphoria and pessimism.

I hope this data serves you well. I came out of this exercise reinforced why wealth building through properties will always be a better option for many because of the low probability of people losing money.

There are some cautions, both on the positive and negative side:

What interesting things could you draw from this data that I missed out?