The OCBC 360 account was a great promotional drive by OCBC to get folks to switch to bank with them by offering 3 optional clauses to get a total of 3.05% interest (read here). My friend prompted me last 2 weeks when he tried to open the account and was told the bonus interest will be reduced. Looks like they decide to provide the announcement on April Fools Day, which, if my friend didn’t tell me previously I would have thought its a joke. 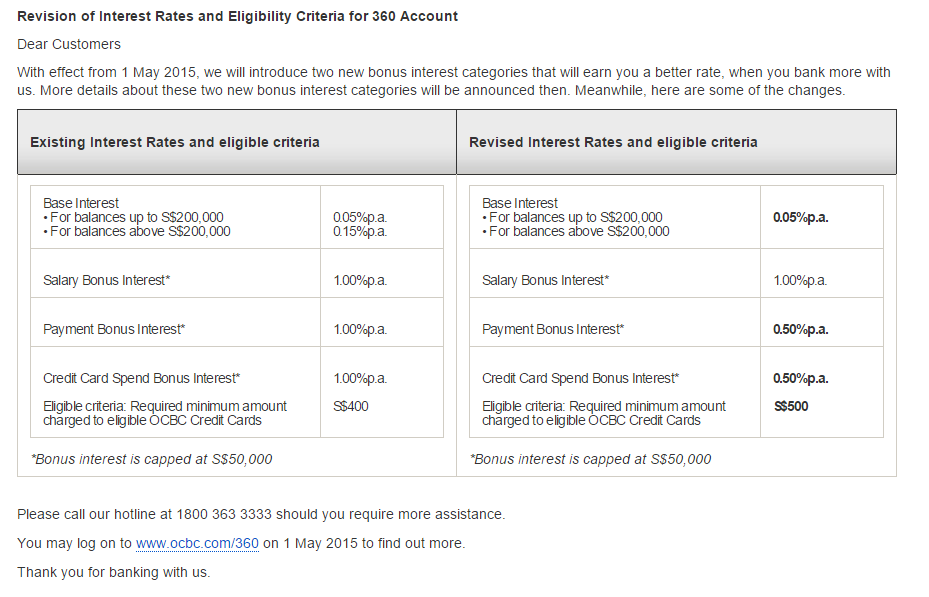 The hurdle rate for credit card qualification have increased, but the bonus for payment bonus and credit card have been reduced.

OCBC will introduce 2 more clauses so that we can eventually hit 3% again.

But after this move I think much folks are still sore over it. The reason of the soreness is that in their minds, they expect these kind of great deals to go on forever. And many have shifted a large part of their money over.

Still, it still looks good in my opinion and I think the costs of the pay out for these loans from depositors are getting a bit expensive for them.

My advice is that, if your world only revolves around fixed deposits and savings account as such, you will tend to find all these deals to be fleeting. Build up the wealth building knowledge to understand that your money have different time horizons and part of the money can be channel to higher yielding, but higher volatile instruments.