In a world that is clamoring for extreme binary views, I do appreciate some moderate views on how things might work out if things do not be too extreme.

We have an idea that interest rates will rise but how would that affect the investment landscape?

Frank Gelber, the chief economist at BIS Oxford Economics offers some of his views, also noting perhaps you should not ditch all your interest sensitive investments but perhaps to rebalance them.

The article, Where income growth is soft, yields will stabilise, then soften, is behind a paywall so I will lift parts of it.

He first explains the link between what drives interest rate rises, growth, inflation and employment:

Has the global financial crisis caused some fundamental shift in the operation of the economy? No. The question of whether interest rates in general, and bond rates in particular, will rise significantly hinges on the outlook for inflation and growth.

Will continued growth and tightening labour markets lead to rising inflation? Yes. Will developed economies continue the present growth? Yes. Will that affect interest rates and, hence, asset yields and prices? Yes. The only issue is when and by how much.

Some think the relationship ­between growth and inflation (the Phillips curve — whereby inflation rises when unemployment falls below a “natural” non-inflationary rate) has broken, that inflation and hence interest rates will stay low even as growth continues. Others, including me, believe that as growth continues, labour market pressures will again cause companies to bid up wages, under­writing rising inflation. On this latter view, present interest rates are unsustainably low — both at the short and long ends, with ­central banks leaning towards stimulating growth rather than con­taining inflation — and will rise significantly as economies continue to grow.

Frank then talks about how we might not be at the end of a growth phase, and the effect on countries other than USA:

Contrary to some popular opinions, we are only half way through the cycle. After a long ­period since the financial crisis when investment has been weak in the US and Europe, the US is just starting the investment phase of the cycle. And Europe will follow, resulting in the pick-up in growth being experienced in most of the developed world.

Will this growth be curtailed by another financial crisis? Not while we remember the last one. First comes growth. Inflation comes later. It’s not only companies but also workers that have struggled for survival following the crisis.

Certainly, the weakness of ­incomes is a constraint on ­demand. But there is no magic wand. Growth will pick up but not all at once. Growth and confidence will return slowly — for companies and workers. And once again the shortage of labour will drive ­inflationary pressure — just not yet. Three years from now we’ll be worrying about inflation again.

On the sensitivity of how likely Australian rates will rise back to historical average:

After a long period following the financial crisis of unprecedented liquidity injections and low interest rates, the US Federal Reserve has embarked on a period of tightening cash rates — with more to come. That has put a floor under bond rates, with bond rates rising by more because of the ­expectation of further cash rate rises. Other countries will follow, some sooner, some later. Australia is a little different. The margin ­between Australian and overseas cash rates provides a buffer to rate rises. The soft economy and weak inflation mean cash rates can stay at present levels for some years yet. But Australia is a debtor nation and needs to compete in overseas markets to fund the current ­account deficit and roll over maturing debt. Local bond rates will largely track US bond rate rises.

Interest rate up, yields will go down, all else being equal:

What will be the impact on asset prices? It was the fall in bond rates since the financial crisis, and the associated injection of liquidity under quantitative easing, that drove the firming of yields across asset markets. In fact, most of the capital growth post-crisis has been because of firming yields rather than rising incomes.

Rising bond rates will cause a softening of yields from that source. That’s what we’ve built into our property forecasts.

Hence the importance of the stockmarket “correction” around the world over the past few weeks as the recognition that bond rates were rising finally hit home. US 10-year Treasury bonds went up by more than 0.3 per cent in this past episode to 2.87 per cent. The logic is that institutional funds will shift allocation away from yield-­focused towards growth assets.

It is not whether they will go there, but how long they take to get there:

Some commentators even contemplated the “inconceivable” ­notion that bond yields would rise above 3 per cent. Of course they will. The question is not whether but when and how far they go. Our official forecast is US bond rates will go to about 3½ per cent over the next few years and Australian bond rates will go to 4 per cent. And the risk is they will go higher.

The impact to bonds:

Certainly, higher bond rates will be attractive to investors. But while ever bond rates are rising, ­returns from higher yields will be offset by capital losses.

The rebalancing to income growth:

Other assets, too, will be affected by bond rate rises. Not just property but infrastructure and equities. The focus will switch from yield to income growth as the driver of returns. That’s more normal. In a sense it’s the past decade of firming yields that’s been the ­aberration. Strong income growth drives asset prices directly, and ­indirectly through the impact on yields. The task is to find areas of income growth.

Identify the forward looking markets with lack of growth:

Meanwhile, in Australian commercial property markets, yields are still firming. But the writing is on the wall. In markets with little income growth, yields will soften. Rising bond rates mean a headwind to returns. By and large, total returns over the next five years will be lower than the past five.

Interestingly, REITs were hit hard in the sharemarket correction. They were all lumped into the higher yield/low capital growth basket, with little differentiation between them. Many are now trading below net tangible assets with little regard for differences in prospects for income growth. That doesn’t make sense to me. The outcome will be driven by the performance of the assets they hold and the businesses they run.

As a summary, if we are talking about individual stocks, REITs and business trust will not be the only one impacted by rising rates. If you have a leveraged company that cannot grow its top line, you are going to suffer as well.

The property sector is much talked about because they are packaged to be well understood.

However, there are going to be the interest rate sensitive investments that may do well. For example, the telecom operators that are able to pivot to become partly an infocomm company, where its cash flow stream is more correlated to growth.

Certain cities will benefit from the improvement in growth, there by there is a higher demand in spaces, constrain in supply and this would result in firmer property lease prices. Certain REITs would have done their job having rental escalation built in, spread their tenant base such that lease expiry is staggered and so are their debt expiry.

They have become more like a “bond ladder” in that they will take the future average REIT or business trust total return. If the rental prices are progressively going to be higher (better growing region), the total return over time is going to average higher.

This does not factor in the strategic management part of using their comparatively cheaper equity to make more acquisition to grow the size of the trust. 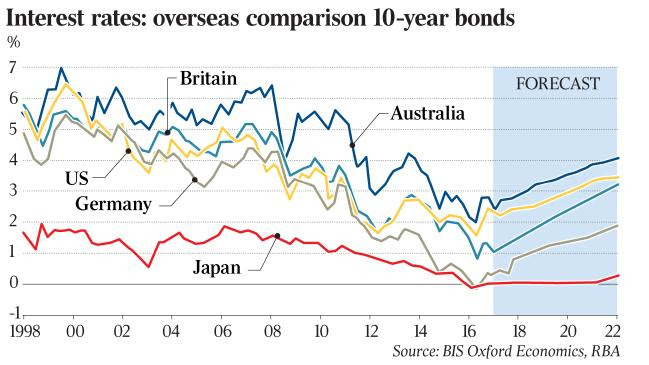