They were not listed via normal means but a reverse takeover of an ailing property developer business that seeks development in the country of New Zealand. Since 2004, they have moved into the business of operating toll roads.

In this article, we look at the profitability of the stock, it’s stability, valuation as well as the business and any economic moats involved.

Value investing books have explain why famed value investor Warren Buffett likes business that exhibits toll road behavior. They ensure that there is

Currently, the majority of CMPacific’s HKD 2.8 bil assets is invested in 3 toll roads in China. These 3 account for almost CMPacific’s total profits.

The beauty of wide economic moats

Toll roads have been around since centuries ago. Authority whether legal or not, extract tariffs from vehicles and people using the roads in exchange of building it originally, maintaining it and protecting it.

Toll roads can be consider infrastructure assets. If you use it, you need to pay for it, just like your power or telephone. A factor of strength of a toll road’s economic moat depends on the criticality of the toll road in the local context.

Thus the importance of the city the roads are linking is important. If it interconnects 2 trading zones or that one area is growing as a major tourism, industrial hub, this toll road will be important.

Toll roads keep up with inflation times as well. As a utility, their tariffs are revised based on economic conditions. Their price can change readily compare to other goods and services and people will have no choice but to pay the tariffs since for trade and work, they have to use the toll roads to travel into the city. This makes this business a viable in inflationary times.

Another advantage that widens toll road’s moat is that you cannot have alot of major roads interconnecting cities or zones. So this limits competition.

Building such roads requires government or state permissions and licenses. They require high outlay to build as well so no Tom dick and Harry can build a toll road if it is lucrative

Economic moats do not last forever. And in the case of Chinese communist tendency there are a few caveats that an investor and management needs to watch out for.

Cities, zones and states economic strength and development strengthens and weakens. Should there be a recession and the city cannot recover from it due to the state being bankrupt or wrong policies implemented, the profitability of the toll roads get affected as well.

Government policy changes. The government might readily revise terms which will adversely impact the road. They might want to increase the cut in the profits for lucrative toll roads. During inflationary times, the government, such as Chinese one, might not let the toll road increase the tariff charged. This will impact the wide economic moat we talk about that is able to keep up with inflation, maintain profit margins.

Rivals cannot build the same toll roads but they can readily divert the traffic. Cmpacific have encounter this one or two times and this adversely impacts the profitability such that they would have to write-off the toll road as an impairment charge.

Substitute transportation can also impede the usefulness of toll roads.

Catastrophic events such as earthquakes and snow storms can also impede the profitability of toll roads.

The difficulty I encounter while reviewing CMPacific’s financial statement is that, the cash flow and profits of the toll roads are not easily understood.

However, I manage to gain some insights to this from Investor Relations.

The cash flow from our toll road operations which comprise mainly of 3 components is accounted for as follows:

i. subsidy income is accounted for under operating cash flow;

iii repayment of shareholder’s loans by these entities are accounted for under investing activities. 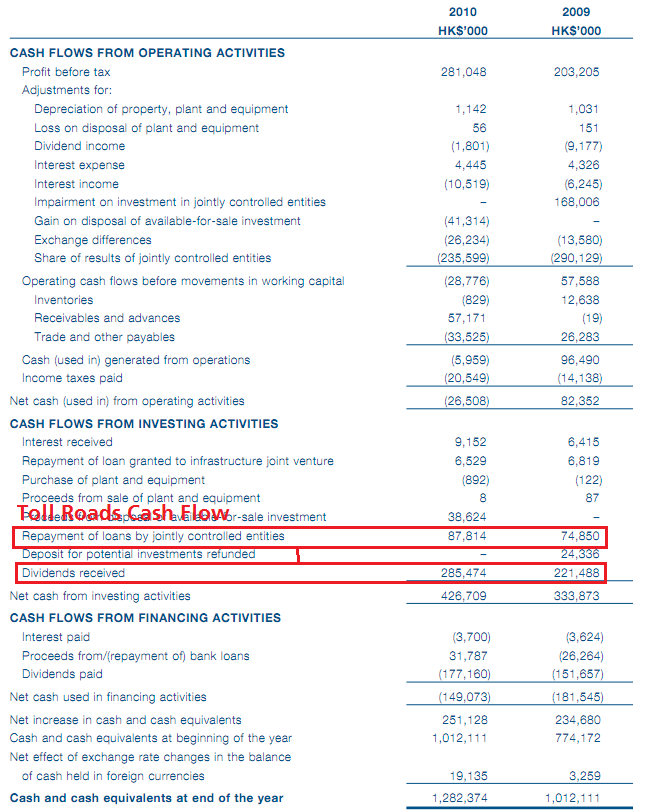 The shitty thing is that this cash flow do not add up to any semblance of cash from toll roads in the income statements!

My suggestion should you get invested in this stock and want to check to see if its profit from toll roads are growing, just follow the income statements. 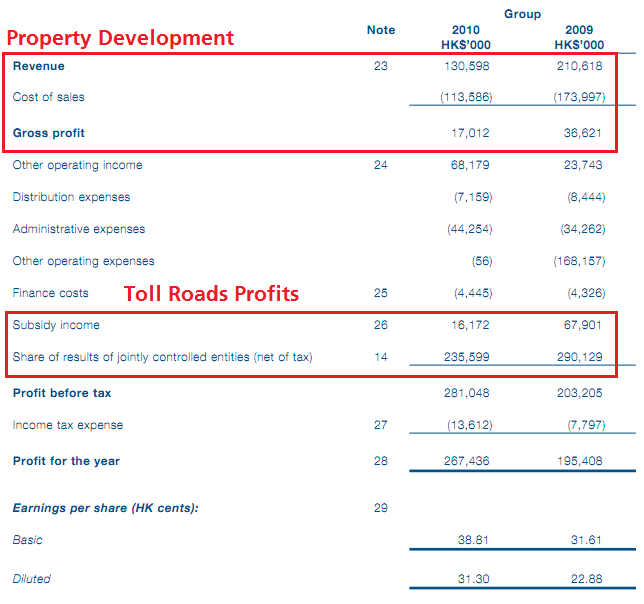 Diving into segmental profitability and performance

The business segment is separated into 2 segments: property development and toll roads. 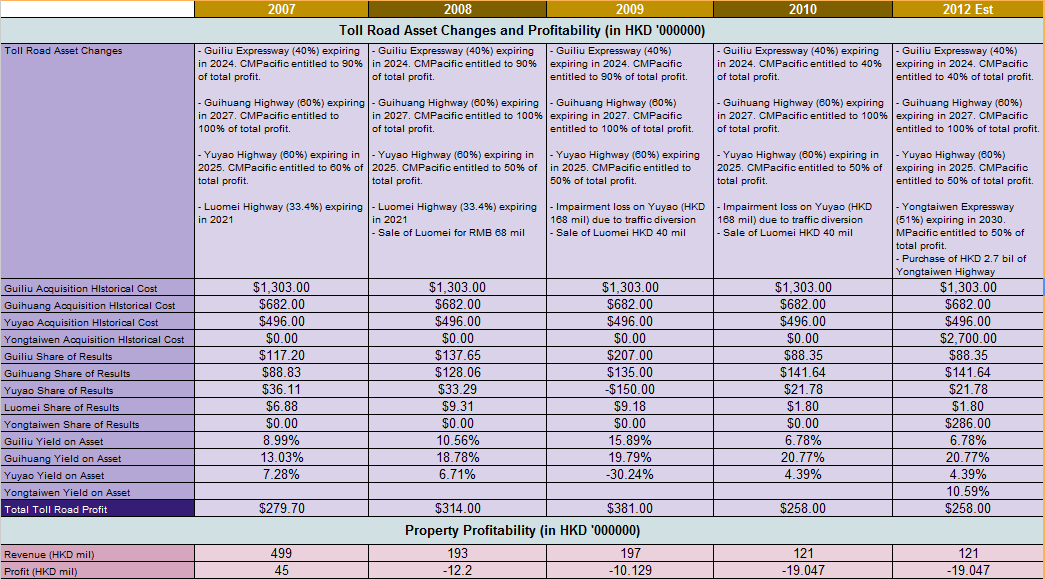 Here we see the segmental profitability, yield on assets for FY 2007-2010. We also want to find out the future profitability of CMPacific since taking over Yongtaiwen expressway so I did an estimation of the likely contribution of Yongtaiwen.

Profits from property development used to be a main profit driver. Since 2007, that has not been the case. It never did recover and have become more of a liability for CMPacific.

The percentage of asset utilized in this segment is minute compare to it’s core business.

The share of results shows the profit contribution of each of the expressways and they will roughly add up to Total Toll Road profits.

It is interesting to note that at different times, CMPacific will received more than their share of profits from the joint venture expressway.

As explained through the investor relations:

The proportion that is above CMPacific’s equity interest is shown as subsidy income.

Subsidy income is granted by the respective PRC joint venture partners of Guiliu Expressway and Guihuang Highway to compensate for the low profitability of these roads during the initial years of their operations pursuant to the joint venture agreements.

Guihuang will suffer the same adjustment in 2015.

The conclusion here is that without the purchase of Yongtaiwen, we are looking at a substantial fall in profits from the underlying toll roads to the tune of almost half the figures of FY2008.

Growth in traffic and profits

Interestingly, the major expressways such as Guiliu and Guihuang have shown substantial growth in traffic since 2007. Economic progress and population, migration plays a large part to this.

At the same time note that in 2009 Yuyao Expressway suffered a drop in traffic due to re-direction of traffic. An impairment charge was accounted to write off the value of Yuyao expressway.

Because certain toll roads was paid more than their share of ownership, yield on asset was spectacular for Guiliu and Guihuang.

We do expect that Guihuang in 2015 to contribute less, but based on current traffic, we should forecast a yield on asset of 10% which is pretty respectable.

We did an estimation on how much profits this new toll road will contribute. Based on 2009 figures, a 51% contirbution will yield roughly HKD 286 mil in profits. Based on a purchase price of HKD 2.7 bil, that works up to a yield on asset of 10%, which is pretty good.

Summary of how profits and cash flow are derived

Dealing with infrastructure assets at a joint venture level requires us to probably scrutinize how profits are derived.

With the purchase of Yongtaiwen, there are not much change in the average concession of CMPacific. For an infrastructure asset, 16 years average is a very short period. Much shorter than even some ships!

The lesson here is that if all the cash earned from the toll roads are paid out as dividends, don’t expect CMPacific to still keep operation without a cash call.

From no debts to leveraged

CMPacific at the corporate level spots a very clean balance sheet. Notice that from 2007 till 2010, Cash holding have been steadily growing from 861 mil to 1.2 bil.

Often, this cash growth is due to firm taking more debts, but this isn’t the case for CMPacific.

Note that under Retained Cash for year from business, instead of paying out all profits, CMPacific have been retaining a large amount of it to add to its cash holdings.

With the use of its entire cash holding to purchase Yongtaiwen, together with HKD 1.4 bil in loans, this put CMPacific leveraged at 21% net debt to asset.

Based on how the management sensibly conserve retain earnings so that they can acquire more assets. The same can be done to clear this 1.4 bil of debts.

CMPacific seems thinly held, and despite the recent 13% market drawdown, CMPacific is resilient at SGD 0.56. In fact, it even moved up from SGD 0.52.

The current dividend payout is SGD 0.04. This brings the dividend yield to 7%. Not too shabby in an overvalued or fair valued general market.

What we are interested in is that when Yongtaiwen comes on board, what is the likely payout?

CMPacific should pay out from 50% to 65% of earnings as dividends and retain the rest of profits.

Wait a minute! Profits increase due to new toll road but why is dividend payout is the same? I get the feeling that even though payouts in SGD is the same, after factoring the strengthening of Singapore dollar we might be losing out on big net gains in earnings.

Rate of returns on assets

I took it a step further to calculate the XIRR of CMPacific to see if its worth buying the stock currently.

We know that the average concession duration on CMPacific is 16 years so we will calculate based on the cash flow generated by the total toll road assets for these 16 years.

We take it that cash flow will grow at a conservative rate of 2% per annum.

The cash flow each year will not be constant. For the first 4 years, we will use profits estimated in the FY2012 I have illustrated previously.

Lastly from  year 8 onwards, we take it that CMPacific managed to pay off its HKD 1.4 bil worth of debts in 7 years, thus the higher net profit. 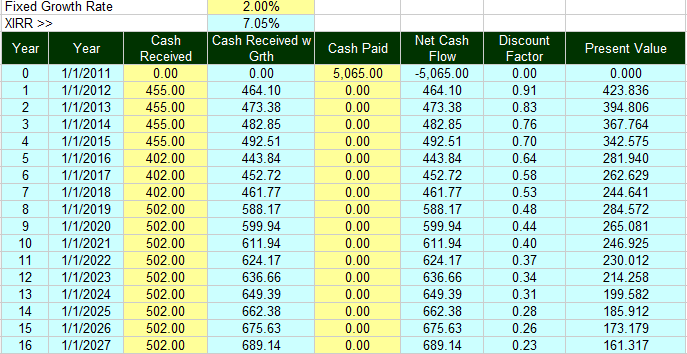 We garnered an XIRR of 7.05%. It looks like the kind of XIRR we get for REITs and business trust so its nothing much to be wowed about.

However, the estimated book value is 3946 mil and current market capitalization is 3031 mil, which is a 23% discount to NAV.

I truly believe, CMPacific is one of the better infrastructure asset stocks listed in Singapore. Retaining cash for debt repayment and to fund future expansion ensures that perpetual profits can be maintained.

This is in stark contrast to a few locally listed utilities or REITs, which had to pay out 90% of profits. In such a case the only way the stock can expand is a cash call, something CMPacific do not always need to rely on.

Still a dividend yield of 7.5% probably do not provide me enough compensation for the risks involved.

Should the market tank further, this stock is gonna end up with a steeper discount and thus yields will be boosted.

we do look forward to it being priced at SGD 0.45. Nevertheless, this stock does look defensive in recent downturn and I will look to pick it up at the right price.