Just like what I talked about yesterday, the inability to stay above the 20 day EMA seems to signify a change in short term trend.

Today the market tried to rally higher but failed. 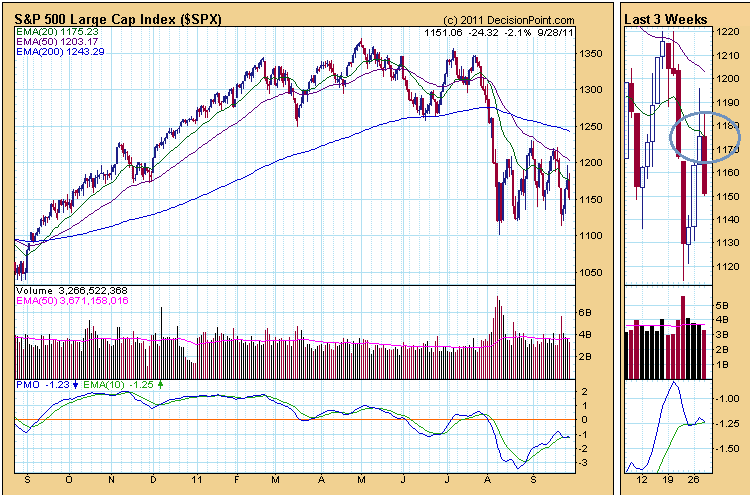 If we move lower tonight and tomorrow, we revisit that question since August: Will 1100 hold? 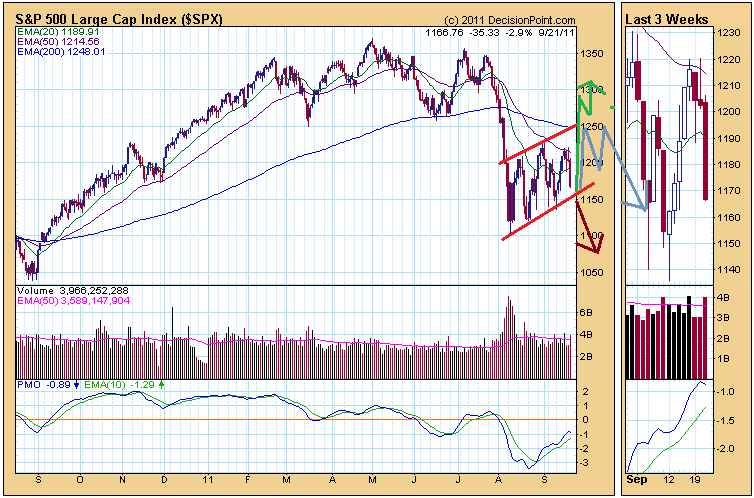 Where do we go from here?

(1) is a queue to lighten up on some plays I got in (2) that might able to collect in lower prices.

Notice tat it is important to have a plan should market move in any direction. It reduces the impulsive decisions we all make when the counter trends occur. 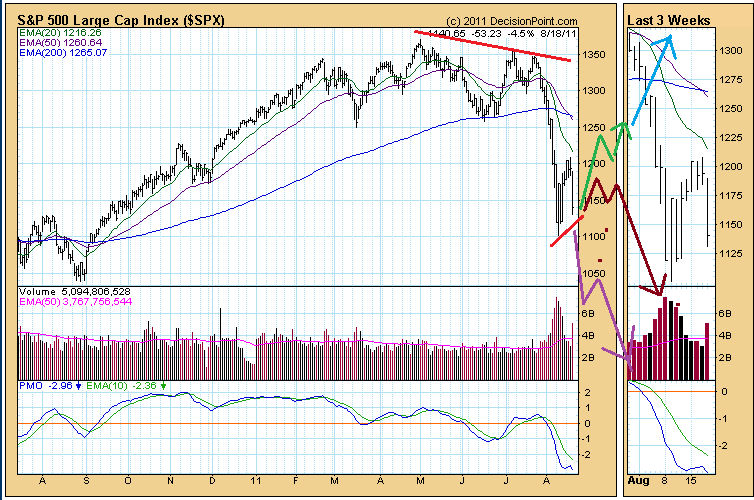 Here is a daily chart of the S&P500. I will try to be positive here and disprove this is NOT a bear forming.

My weekly 17 Week and 43 Week EMA have not created a sell signal but there are 2 ways bearish trend could develop. It will either continue this low volume gyration between the 20 EMA on the daily chart and the 1150 region (dark red arrow). In this case, it will give time for my 17 week to cross over the 43 week. The other way is for a full blown drop off for the next few days (purple arrow).

So here is the equation

What do you guys think? I find it hard to be optimistic here.

Drizzt: long term market analysis is a series once or twice a month where we take a look at longer term trends in the market to get our bearings right on the general direction of prices.

I wasn’t going to do a long term market analysis series so soon but when the DOW fell by more than 500 points and STI fell by 100 points it is better that we take stock of where we are.

The Dow Industrials DJIA finished Friday up 60 points, but fell 5.8% for the week, the worst weekly performance since the week of March 6, 2009, when it dropped 6.2%

Ignoring the noise on the street

Many of my friends have reasoned why this crash happen or the weakness in the markets is due to the debt ceiling problems in the US and debt problems in Europe. I would say I really do not have a great idea what are the decision making.

To me price is the summation of all market behaviors, the demand and supply of how people as a crowd votes whether they like the situation or not.

The news do not create the price. The price creates the news.

How true is this? The debt crisis have in US and Europe have been going on for months yet look at the price charts below. They have been going up and going down. People made money by being nimble.

1 Day before this plunge the US settled on the resolution on this debt ceiling. What happened next is that instead of market surging due to this the market plunges.

As mentioned in the last long term market analysis we are still at an inflection point where the market could consolidate here and then move upwards, or that this is a narrowing of price range forming a long term toppish condition. 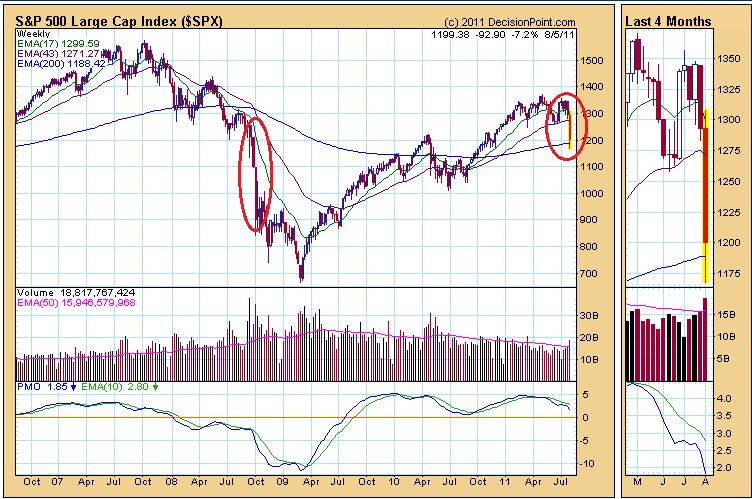 We talked a fair bit of using the 17 and 43 weekly EMA as the price signals whether we are neutral, bullish or bearish on things. The 17 EMA and 43 EMA have been consolidating and narrowing.

This does not indicate a top in the market since in Apr-Jul 2010 we see a similar formation which presents a resumption.

Should it consolidates further this might turn down to be the market top many were anticipating.

Note that 17 and 43 Week EMA are quite long term averages and do not turn based on 1 or 2 days news. The summation and the crossing to the downside or to the upside more or less means a bull for 2 months or a bear for 2 months. 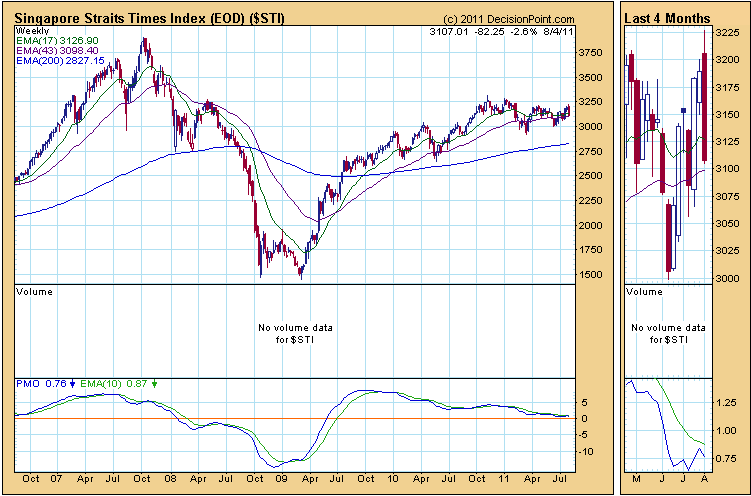 The STI looks much healthier from the longer term perspective. You can see the narrowing of the 2 EMA and that we could well stay like this or go in either direction. Still difficult to call.

Many of my friends were say this is a big drop and that they have never seen such a big drop. 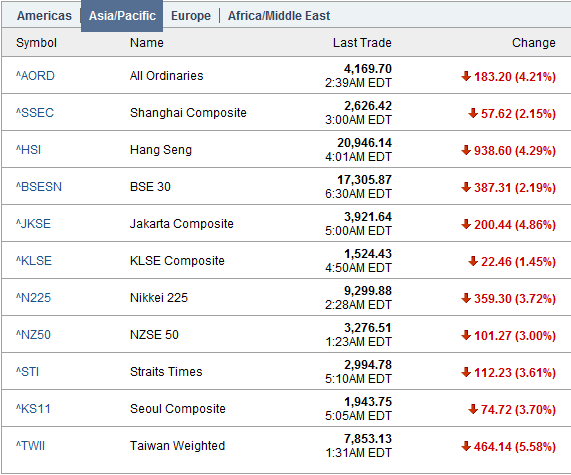 This is yesterday’s Asia Markets Summary

By no means are today’s drop big. But what is important is we take into context this price movement, the sentiments behind this and what it means.

What I notice is the markets making 1% to 2% drops for 4 or more days. Normally this is already an oversold condition and a market rebound is likely. Yet after a day where the market rally 1% it ended up nearly back to where it was on the same day.

These are very negative sentiments.

The bigger fall yesterday took me by surprise really. It happened after a sort of better news was announced. We were expecting things to be delayed and back to normal yet it went in the opposite direction.

Had this be a long term bull market we shouldn’t see it being littered by 5% down days but smaller down days. More of these negative shocks are the behavior of a bear rather than bull.

Social Mood reinforces and strengthens. To the upside its all good. To the downside it becomes dangerous because we will be expecting margin calls which will make the situation worse.

All this when taken into context means a probable change in volatility.

Its Ex Dividend Week this week for me, but since I was on the edge for most of the year, I have cleared majority of my holdings 2 days before this big correction. It is important to understand how you are wired and always analyze the stupid things that you do last time.

It is not easy for me to do this since the last few times I did, I missed out on accumulating Starhub or First REIT at a low price. However, I am more risk adverse and have programmed myself to swing in should the map becomes clearer.

My plan is to let the map (my long term analysis) tell me where we are and continue to find those fundamental good income yielding stocks so that in the event that the trend goes up or volatility reduces, I know which are the stocks to venture into and not go into panic buying and panic selling mood.

My transactions can be reviewed here.

This did not stop me from trying to accumulate good shares and my venture into SIA Engineering a day before this crash cost me a cut loss of $750 =( . Falling knives are dangerous to catch!