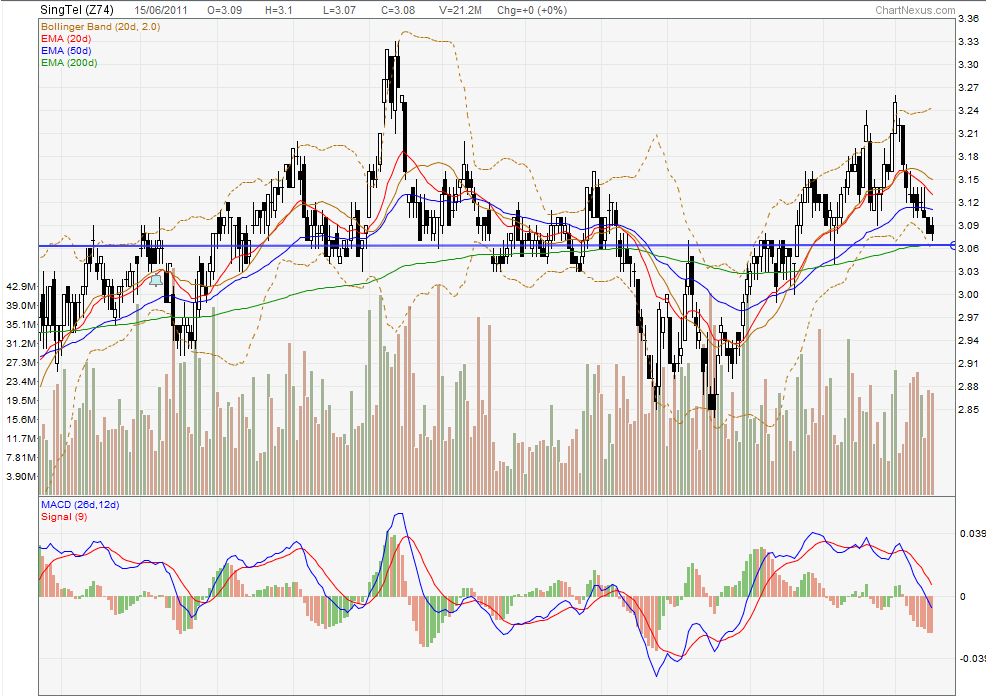 Market have been relentless! I feel that 3.06 will be important for Singtel.

MACD looks to go below 0 and at 3.06 that’s where the 200 day MA and a key support and resistance revisited many times in the past.

So my brother (the other breadwinner) will likely be moving out of our flat soon. That means alot of thing to me but for one thing it is that I would need to juggle the household expenses by myself.

The first thing that hit me was that I would probably need to pay the communication and entertainment utilities all by myself.

It still astounds me sometimes how expensive maintaining communication and information is. Take for example most of my friends who aren’t married:

The total cost of connectivity comes up to 100-180. If you have more than one family member that holds a mobile phone then that goes up further.

The saving grace is that if you sign up with one telco, they give you a major discount off your mobile phone bill. The problem is that not all your contracts end at the same time and these Buffett deals are not always best because some service just suck like MIO Tv(suck) vs Starhub Cable TV and Starhub(suck) mobile vs Singtel mobile.

I am currently re-evaluating my cable tv and home broadband plan. Their contracts expired some time ago and with my bro moving out think it’s high time I do something about it.

Some would ask, wouldn’t cable tv and mobile broadband be considered a luxury? I don’t watch tv much actually but my parents need some entertainment now that they are not working so I really don’t have much of a choice here. I have since cancel any mobile broadband plans that I sign up for as really if I need I can always tether from my mobile phone. The price of being connected any time and every where is simply too high.

I would love to re- contract my current Singnet broadband for lower than 25 dollars if possible but sadly to enable a seamless home Internet connection (I don’t need very fast speed) it will cost me an arm and leg.

The current packages from Singtel, Starhub and M1 forces you to not only sign up for home broadband but also mobile broadband by bundling them together! It will be great if you invest in the 3 telecom companies like I do, but if not, you will think that they are being a dick to do that. My cheapest choice is to subscribe to the 29-31 dollars per month m1 50GB fiber optic broadband.

Seems like no matter how we adjust the cost just keeps creeping up. To be honest, home broadband, mobile broadband, cable tv and data plan for mobile phones are what I considered as luxury items. But I really can’t imagine not having mobile connectivity at least at home and on the move on my mobile phone now that have used them for the last few years.

Although they are so called luxury, users get tied in to this lifestyle that they can only switch but not do without. If cutting these away is so hard for even a frugal person like myself, I think it’s even harder for other folks who are lazy to think so much about the pros and cons and would just evaluate how to switch instead of terminating.

This is the business model of the telecom industry. It has become a lifestyle utility that people needs.The telcos will try to keep plans at current price or raise new plans and tell you that you need them when really you have survived 20 years without them. In the midst of all this they burden themselves with trying to compete with one another, through price, service differentiation and quality of service, balancing cost versus volume monetization.

As an end user, I would tell folks that you really do not need the best or all the things they try to sell you. Most are really the price of convenience and satisfaction that they try to sell.

As an investor, this industry is here to stay. And it has become important. I see it as recession proof due to long contract lock-in cost, necessity & habitual spending.

I took this weekend to draw up a list of stocks that would buy should there be a massive drawdown in the market.  They are what I think are fundamentally sound and could be massively mispriced in a bear market.

I will not talk too much about them but would like to hear your comments as to whether I am missing out on other gems, how much these stocks would likely go down by.

For each stock I highlighted their respective drawdown during the 2007 Dec to 2009 Jun recession. If you think the so called blue chips will stand the test of time, the answer is yes and no. All of then suffer huge drawdown from 40% to 75% but they also bounce back strongly. The question is will you get spooked. 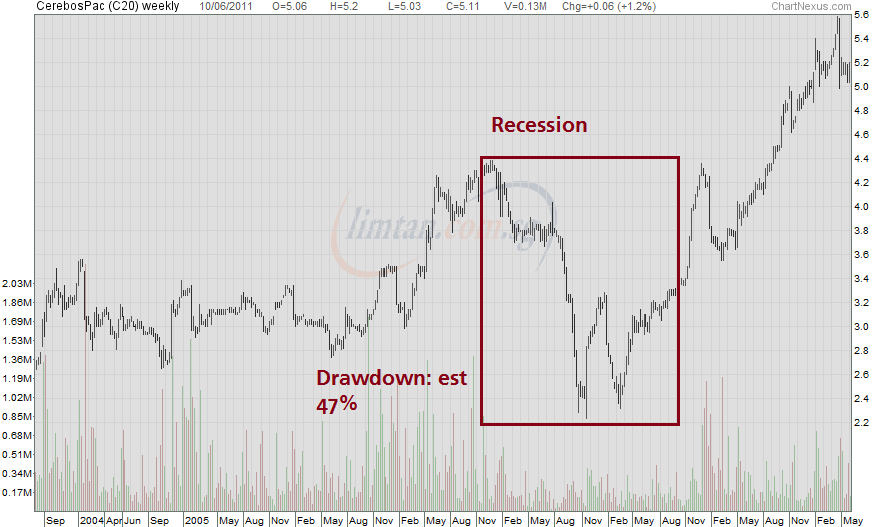 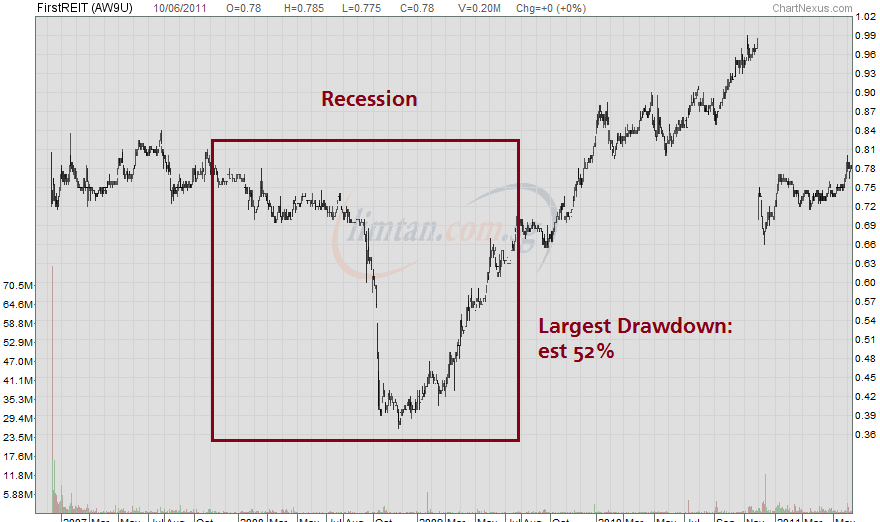 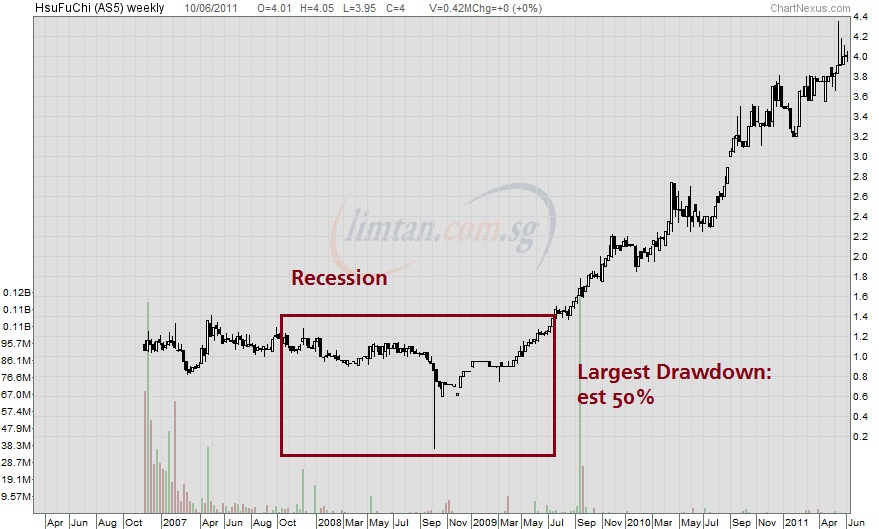 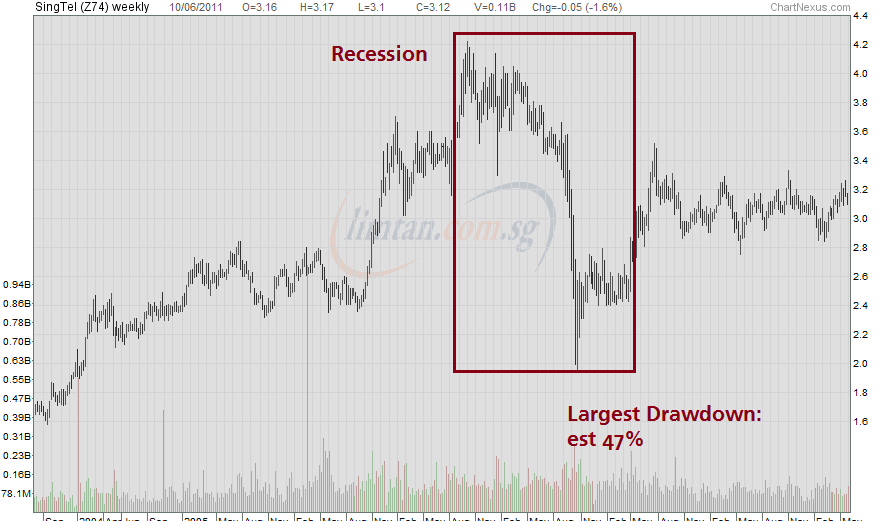 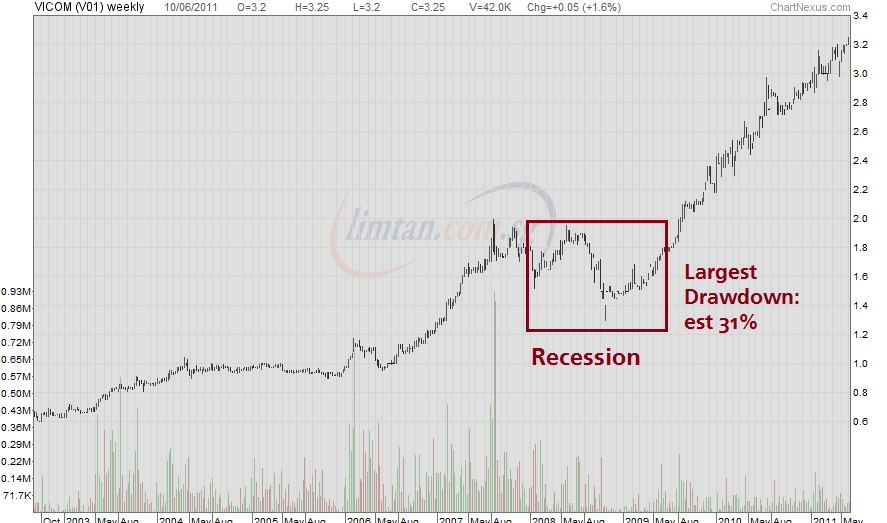 The main reason given is to boost Telkom’s EBITDA but the main reason could be due to the aftermath of the on-going lawsuits where ST Telemedia, another Singapore government linked corporation, sold its stake in Indosat after Indonesia ruled that Indosat and Telkomsel were fixing prices.

According to CIMB, a likely reason is Telkom’s intention to own 100% of Telkomsel because SingTel is reluctant to sell Telkomsel’s cell towers to Telkom. Telkom had intended to park all the towers of its units under Daya Mitra and eventually list this entity. Taking full control of Telkomsel could pave the way for this transaction. Telkomsel controls the largest number of towers in Indonesia, about 20k or 40% of industry total.

The potential impact of the sale is rather large. Telkomsel holds the number 1 market position in Indonesia with a market share of 46%. This tie up with Telkom in the past would have been very strategic with rather strong economic moat.

The lawsuits and protectionist actions from the Indonesia government doesn’t help SingTel. Obviously it looks like another case of state owned enterprise wanting to gobble up a business that have been fine-tuned privately.

However, Indonesia is one of the top 5 most populated country in the world. Holding a stake in Telkomsel long term will always have a cash flow diversification benefit.

Losing this will mean losing the value added potential that comes with 3G data and the cross service and third party service that can be bundled with 3G.

Certain future potential opportunity cost lost is very difficult to calculate. SingTel may not be able get any such good foot hold into the Indonesia market soon.

Taking a long term stake in Telkomsel in 2001 at 22% for 1 billion dollars look like a very good investment now.

When 3G data comes online, the potential growth here could be big. Current profit contribution is around SGD 650 mil and l wouldn’t be surprise this grows to SGD 800 mil.

If you look at the return on assets of SingTel’s stake in Telkomsel, its about 19%. This is compared to

The smart manager should focus on potential new markets but also secure market’s where you are able to get a high return on invested capital.

Optus based on return on assets look like a terrible terrible investment if you ask me and losing Telkomsel  which has such a high ROA is quite a smack in the face.

Telkomsel makes up 14% of SingTel’s overall post-tax profits. This is compared to:

SingTel in total pays out 2.5 billion from this 4 billion in free cash flow for the current 5% normal dividend yield (interim+final).

SingTel have a policy of paying 55% to 70% of its net profit as dividend and this 5% yield  will bring dividend payout to 70%.

Neutral – SingTel will need to effectively redeploy this cash

Should the buy-out goes through, it is likely that SingTel may sit on a sizable amount of cash. What would they do with it?

What is the adequate compensation for losing these opportunity for future profits?

If we project the cash flow for 10 years the intrinsic value of the investment is 7.6 billion. In this case, getting 10 billion sounds great.

In the latter 2 case,  SingTel is not getting a great deal.

At the end of the day, it will depend on a lot of factors for SingTel to negotiate the right compensation. If they become too forceful, political pressure might come in.

As an investor, the job is to evaluate whether this is still a good investment. A lot of these drama will play out but could take some time.

I sense that getting a 10 bil compensation might not be a good deal for SingTel, but hope that the management are able to value their investment in Telkomsel well and sell to Telkom at a premium price.

Disclosure: Writer is vested in SingTel at the time of writing