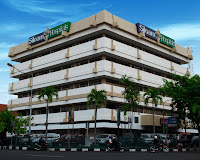 So I wrote in to First REIT’s in the past to enquire about earthquakes and inflation, 2 very common thing in Indonesia. Victor from First REIT gave me a good breakdown on that here.

One of my readers Nick mentioned that Parkway Life REIT have a somewhat uncapped inflation protection mechanism. This means that the rent lease escalation of ParkwayLife REIT tracks inflation well.

So we know that Singapore’s inflation have been fluctuating at around 5%, Parkway Life REIT’s growth this year have been 5.3% as well. Perhaps that is why it is so resilient in these tough times.

So is this the same as First REIT? I know that they have an inflation rent lease escalation mechanism in placed as well, but it seems to be capped at 2%. I queried Victor again to see if it is the case.

One thing I gotta hand it to Victor is that he spends time clearing up your doubts about First REIT. If he feels its better to talk to you over the phone he will do that. The same as the good lady from CapitaCommercial Trust.

Indonesia’s inflation rate is roughly 4.6% recently and throughout the past 10 years have reached a high of 17%.

Singapore’s inflation rate have been high at 5.2% (yikes! higher than Indonesia) but throughout the last 10 years we have another spike in 2008 at 7.8% if not its been below 2%.

All in all, a good confirmation of what we knew previously that Parkway Life REIT probably had one great inflation mechanism and that First REIT wasn’t so shrewd to put in place.

I hope this clears up some of your doubts as well.

Aberdeen Asset Management have always been known more for their value investing like style of choosing companies so it is interesting that I saw that they got vested in SBS Transit at SGD2.20.

SBS Transit have fallen quite a fair bit due to fuel cost and possible increase in operation cost.

Could it be that Aberdeen sees value at SGD2.20?

I dunno about this, since i haven’t go back and take a look for some period.

As you can see the payout was pretty consistent last three years. the question is if it will continue in a high inflation environment.

On an average their operating cash flow is around 120 mil. Lets say expenditure increase to 60 mil and they save 10 mil. That means they can still safely pay out 50 mil. I believe they can still payout 0.20ct of div this coming year.

The yield would work out to 9%. I think its pretty good for a business that will generate continuous cash flow due to their duopoly status and ability to raise rates in an inflationary environment.

Its a good consideration!