In daily conversations with friends and family, we often get judge or judge others on some of their extravagant purchases.

The fundamental problem with doing that is that, you may not have evaluated what the person does with the person or family’s full context.

We have a good example here.

Star Citizen is an interesting Kickstarter project where the lead designer, Chris Roberts seeks funding to create a game that a niche group of people will love. He raised a respectable US$2.1 million from Kickstarter. Then he went alone to try and raise the money himself by starting a WordPress blog.

That is freaking mind boggling. And to make it even more surreal, the buggy game isn’t completed yet. This game can be played single player, multiplayer hosted by the company, or modded to something you host yourself.  At this point it seems like just a normal game.

But Chris Roberts came with a different kind of pedigree. For folks my generation you would have played his Wing Commander series of space flight games and Privateer, which introduced me to space combat and trading.

So what are the folks who funded the company paying for?

THE UNITED EMPIRE of Earth Navy caused quite a stir last November when it announced that it would be putting 200 decommissioned Javelin Destroyers up for sale. Each 1,132-foot-long spaceship has the sort of amenities that your average interstellar mercenary finds hard to resist: four primary thrusters,12 maneuvering thrusters, a heavily armored bridge, private quarters for a captain and an executive officer, six cargo rooms, general quarters for a minimum of 23 crew members, and a hangar big enough to accommodate a gunship. There’s even a lifetime insurance policy.

The document that announced the Javelins’ impending sale took pains to stress that these warships were fixer-uppers. “They are battle-hardened and somewhat worse for wear,” it read, “and have been stripped of the weapons systems.” Thus, any would-be buyer would eventually have to shell out extra to equip the 20 gun turrets and the two torpedo launchers. The asking price for each ship: $2,500. And that wasn’t some form of fictional futuristic space bucks; it was 2,500 real dollars. Actual, real, present-day American Earth dollars.

Despite those caveats, all 200 Javelins sold out. In less than a minute.

The folks are paying for virtual ships.

You can check out the full coverage here at Wired.

In the context of gaming, I am sure a lot of kids will be thinking why the heck are these imbecile folks spending that much on a game that you could have had by playing some other space MMO?

The majority of the folks who supports are in their 30s and 40s, where Chris Robert’s games are an important part of their life. It shaped how they view things, shaped their creativity, inspired them to work in development and gaming.

Some of us is in our mid life crisis, being jaded with our lives.

If you tell us that we can somehow go back to a time where we were extremely inspired and happy, would you spend for that?

This is perhaps why 39 year old Wulf Knight spent currently US$22,501 on the $2,500 Javelin Destroyer, $10,000 on a Wing Commander package, a special package containing 44 ships and an exclusive club.

Imagine trying to tell your wife that you spent $2,500 on an intangible virtual ship. I think most wife would flip on finding that out.

Wulf Knight have a good explanation for why he is able to do that:

“I’ve got a Pokémon complex,” Knight told Wired. “I have to have them all. They put it out there, I buy it.”

You might think that Knight would be feeling some level of buyer’s remorse over spending so much on virtual items. But he has no regrets.

“I’m a professional, I’m married to a professional, and I have no debts, so I have resources to put into my hobby,” he said. “You could spend this much restoring a car. I know people who have $3,000 paintball markers.”

Also in the story, Knight reveals that Roberts’ most famous game, Wing Commander, was a formative experience for him, teaching him important professional skills.

“Chris Roberts launched so many IT careers, it isn’t even funny,” Knight remarked. “And now, after 10 years, he’s making another space sim? It’s like Tolkien coming back from the dead!”

“Some people think, ‘I put a hundred bucks into this game and you owe me this and this and this,’” he says. “No. Your $100 entitles you to just as much as my 22 grand does, which is zero. You gave them money to make this game. You’re not buying anything; it’s a donation.”

I believe Mr Knight wasn’t that please with some of the flak how Gamespot zooms in to profile him in this article and here is his retort: 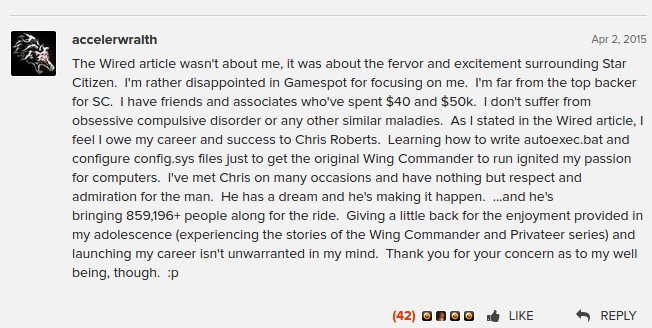 And such an article is likely to generate much hate, most notably that this guy is a bit of a retard to spend that much money on virtual intangible things.

He is right. That is not a very responsible thing.If you know Mr Knight and his motivations, not to mention his ‘special relationship’ with the game. If you think it through, there are enough hints to show that this guy probably isn’t earning $40,000 a year. And some comm-enters made good counter points: 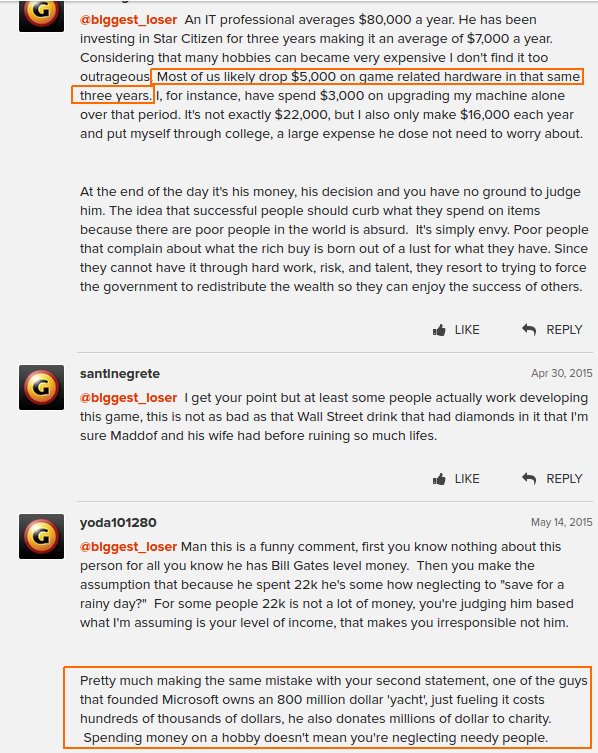 The few take-away from this is

Me? I’m looking forward to this game!

I get alot of misconceptions on frugality and it stems on being a miser, making use of others or living like you are in the 1970s.

Actually thats not it. Its about spending less than you earn and spending on things that is of value.

That would mean buying a $499 Chair compared to the $49 one since it last long and its good for the spine. Something along that line.

This Article from Digerati Life sums it up well:

The happiest people out there are those who can find a balance between any extreme, and it also applies to how we handle and manage our money.

Do you earn more and spend less? If your mind and heart are in tune with how you’re managing your money, if you’re able to build a healthy nest egg while spending much less than you’re earning, then I think you’re still in the middle of that frugality spectrum even if you happen to own a BMW, an art collection or a luxury condo (hey, this is an appreciating asset!). Yet this doesn’t stop others from judging you on what you own.

If we judge people based on what they own, then we could be missing out on some great lessons and examples given by true value spenders.

See, for instance, these consumer profiles:

[Read the full article at The Digerati Life >>]

Readers at my blog would notice that many of my best of articles on the right sidebar are flowchart or chart based.

Visual representation ease understanding in that it gives a full picture before zooming down to detail explanations.

I found this off The Consumerist that i find it simple enough for the average consumer to decide whether to buy or not to buy an item. Much important, the thought process that he or she should take when evaluating an item purchase.