WASHINGTON — President Barack Obama, looking to pay for his ambitious health-care plan and shore up public support, endorsed a surtax on families earning $1 million a year for the first time Wednesday. 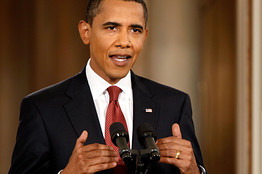 “To me, that meets my principle” that the cost of overhauling health care is “not being shouldered by families who are already having a tough time,” he said at a prime-time White House news conference.

At a critical moment in his presidency, Mr. Obama is hoping to regain momentum on his domestic agenda by seizing control of the health-care debate. How effectively the president delivered the message in his late-Wednesday news conference — and the impact on public opinion and a skittish Congress — will have major implications for the rest of his year, and perhaps for his full term.

He also pressed his case for giving independent experts greater power over Medicare cost-cutting. He is pushing the idea partly to satisfy conservative House Democrats worried that the health legislation doesn’t do enough to control health-care spending. But the president’s strong endorsement sets up a showdown with some senior Democrats on Capitol Hill who expressed opposition to the idea earlier Wednesday.

[Read More of this article at the Wallstreet Journal >>]