SPH have been a grandfather stock for many retirees and dividend stock investors.

I have to admit that for 2-3 years I have the impression that SPH is going to have a challenging business model.

All this points to

How well has this worked out for SPH?

Here is my thoughts how SPH intends to be relevant:

One thing going for SPH is that they are still the largest provider of Singapore based content. They should not rest on their laurels but learn to open up and be more neutral in their content. 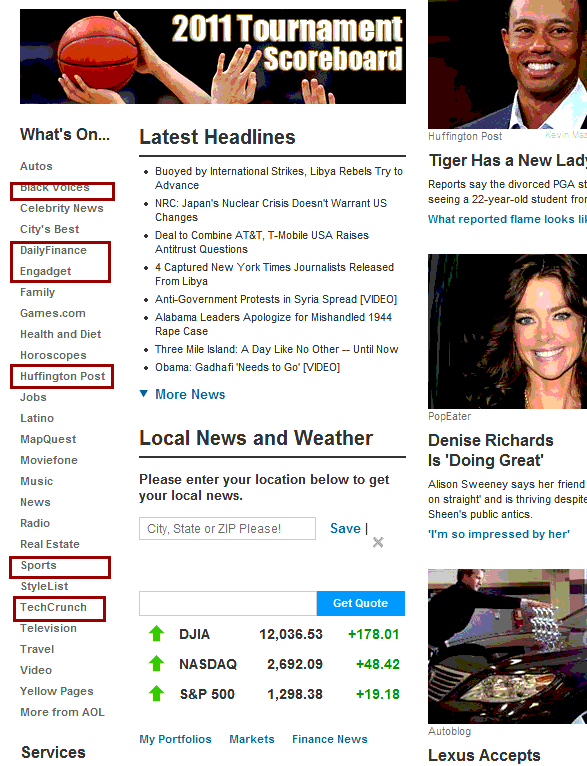 AOL’s example of buying Huffington Post for USD $300 million is the best example. AOL have slowly develop from offering internet services to becoming a content provider. All the highlighted links are leading content providers in each of their own categories.

The Key to the game is still advertising. Make your full suite of platform relevant to continue to attract advertisers.

It is made known that online advertising is much cheaper than traditional means. But really SPH do not have a choice, they have to take advantage of it. If not others will do it.

At the end of the day, the battle ground shifts, but SPH can still dominate it by hogging eyeballs. When eyeballs and content is theirs, advertisers will continue to see your platform as relevant.

Just like SingPost, they will need to put their Free Cash Flow to good use now. The best way is to evolve and not be reliant on their main core business. 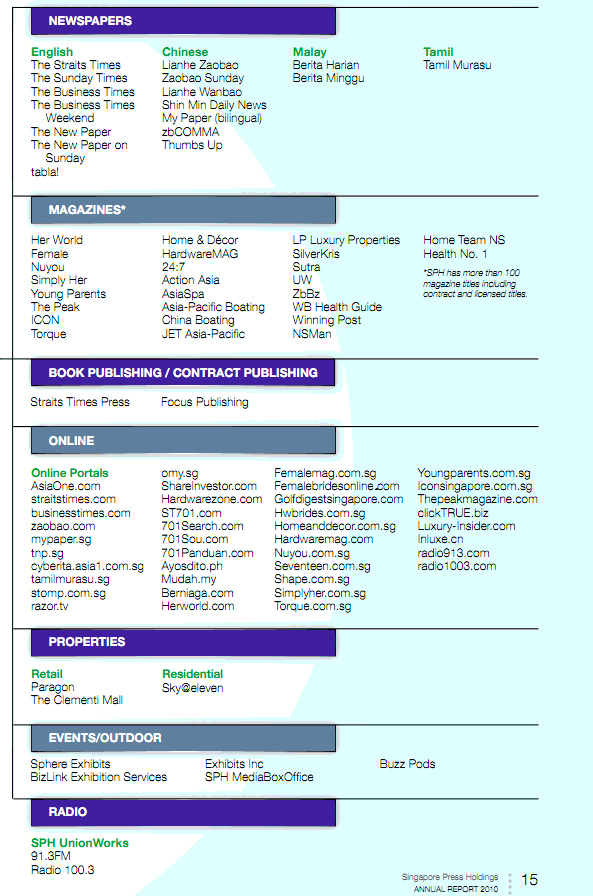 Here is an analysis on their strategies.

For its business, expecting a 6.5% market yield is not too demanding but also not very generous. Its just about right.

To pay out 25 cents, this would cost SPH 400 mil. The key is to see if SPH can consistently meet this 400 mil with Free Cash Flow or Profits

A closer look at readership, revenues and earnings

I know we can always focus on EV/EBITDA, Free cash flow and all those fundamentals but I would really like to show some 10 year data trends. 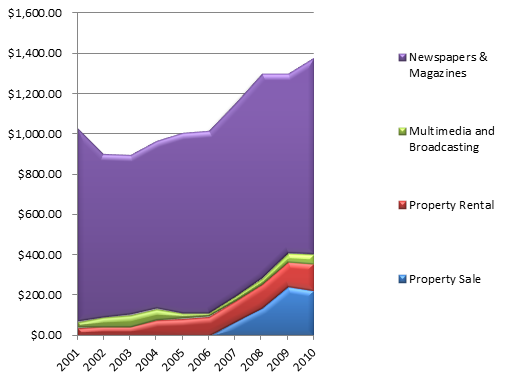 Here is a chart showing the 10 year segmental revenue composition. Each segment stacks on top of each other.

Remember that back from 2001 to 2006, SPH does have a significant Radio and TV business. That flopped pretty badly until they sold it off.

From 2006 till now, they developed a property development business. This adds to overall revenue and profits to sort of diversify away the niche business risk.

But at the end of the day, a large part of the revenue is still made up of newspapers and magazines. I believe that much of the increase is due to the increase in population in Singapore.

In light of the challenges mentioned above, should we be concern?

Here is a look at the 10 year profit by segments. Its abit different from the segments before.

Property is made up of both sale and rental. Treasury and Investments are the profits from their short term investments in bonds and equities. Others refers primarily to their old TV and Radio businesses.

Free Cash Flow analysis is a pain for me as there are many moving parts to it. I chose the lazy way of using Net Profits.

Average Net Profit for all segments for the past 10 years is 502 mil. For the past 3 years it is 530 mil. Safe to say based on profitability, SPH can pay out this 400 mil in dividends for 6.5% yield comfortably.

Its abit disappointing that no data showing New Media vs Old Media business segments. All of it are dumped within Newspapers and Magazines.

What we see here is that Property is making up for the performance loss in recent times from Treasury and Investments.

This segment of property + treasury and investments is important because it accounts for nearly 200 mil in overall profits. Quite sizable to the average Newspaper and Magazine profits which is around 332 mil.

The key for SPH is really to build up a sustainable alternative income stream not based on newspaper and magazines. Currently it is consistently at 200 mil, and we should see that Treasury and Investments are competing assets. The intention to acquire Clementi Mall signals the future as a quasi-REIT,  but without the management fees.

If you are purchasing SPH as a niche newspaper play, you might want to look away because it is going against the core idea of focusing on where you are best at. Yet their management of Paragon have done ok. But what is Paragon’s net property yield? I have yet to uncover that. Shall try to post the question to investor relations.

A note on the segmental profit is the negative blue region. That represents the loss on investments in TV Media and Advertising. Its astounding why that segment really didn’t worked out. Perhaps the level of resources require (the quality that is) is not enough to making it worth while. 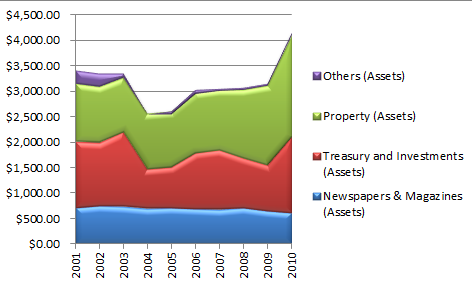 One area you will notice is that assets growth for Newspapers and Magazines(blue) have stayed largely constant. Little capital expenditure goes into this area in the last 10 years. (Capex figure below)

The economic moat of newspaper publishing is similar to that of postal in the sense that the same fixed assets where well maintain can be use for a prolong period of time.

But we should expect capital replacements once in a while as in 2001 and 2002 there is roughly 250 mil of capital expenditure.

In recent times majority of SPH’s assets were held in Treasury and Investments + Property.

Property assets stayed around 1 bil for long periods until the recent move to property development and purchase of Clementi Mall for rental result in a 50% growth in assets. 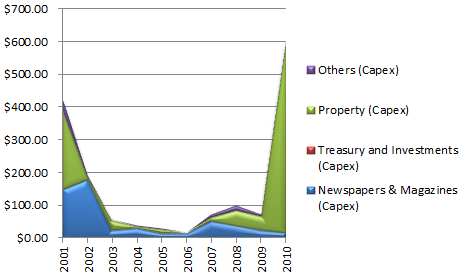 As illustrated, SPH capex have been low (less than 100 mil!) until the recent purchase of Clementi Mall which almost jacks up 600%

How we was each segment performing over the years. I deliberately took out TV Media and Advertising because other than 2001 its been bleeding badly. It would skew the segments we should focus on which is Newspapers & Magazines, Treasury and Investments and Property.

Newspapers & Magazines have enjoyed a high return on assets as assets wasn’t climbing and population of Singapore have been increasing by foreigners. Notice that there was 2 periods of dip and are all related to recessions (2001-2003 and 2008-2009).

The impact of recession to advertising cannot be discounted. It is where the other recurring income offsets this.

Treasury and Investments performed really well in 2003-2005 there after returns have been very very low in recent times.

The up and coming segment have been in property, both rental and sale. On an average the return on assets is around 10%. Note that Clementi Mall’s contribution is not in. 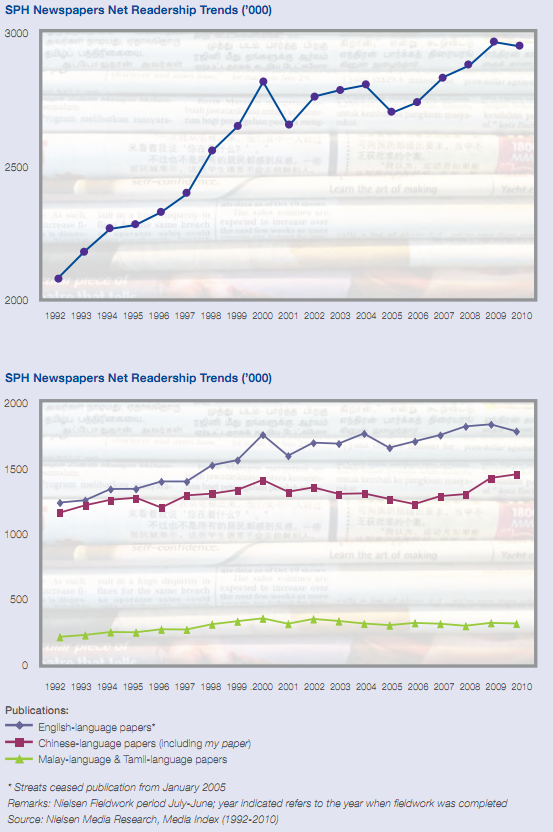 Newspaper readership have been increasing until 2010 where we see some stagnation. Back to the point of how new media impacts  newspaper readership. We see clearly that readership trends might be falling off. 2010 might be a one off but I have a strong feeling it will continue.

English news readership is having a bigger impact from the smartphone trends and news alternatives competition compare to Chinese. Chinese readership increases is likely due to the influx of Chinese workers.

However, compare to segmental profits from Newspapers and Magazines, each drop in readership or increase in readership does not directly means net profit is affected.

I would say there are more factors in play such as cost expense that matters as well.

I would like to end off my re-look into SPH by saying that I am wrong about its cash flow in the past. It definitely has a positive free cash flow and it was my mistake to mis-interpret it.

Sustainability of their 400 mil dividend payout will depend on

400 mil is currently safely paid by an average of 300 mil in Newspaper and Magazines + 200 mil in Property and Investments.

To be safe the alternative recurring income source should build up to contribute more to the stability of the dividend.

Going forward the rise in assets from Treasury Investments + Property increases from 2.5 bil to 3.5 bil. That is a 40% increase in assets. A conservative estimate of 8% returns on this 1 bil will bring about an increase profit of  80 mil.

An alternative recurring income from properties and investments of 280 mil (200 +80) should largely cushion any fluctuations in Newspaper and Magazines. We could even anticipate a larger dividend payout.