That was like 30 years ago. 7 years after I was born but I have no recollection of it.

Our experience with huge market draw downs may be different. For many of us, its limited to the 2007-2009 drawdown.

For some of you, your whole market experience was spend between 2010 to 2017 where there were no market draw downs.

Going through something like this affects your perception of certain financial assets.

It also affects how you set up your portfolio. I get so scarred that I am always in a large cash position. And this affected my return. 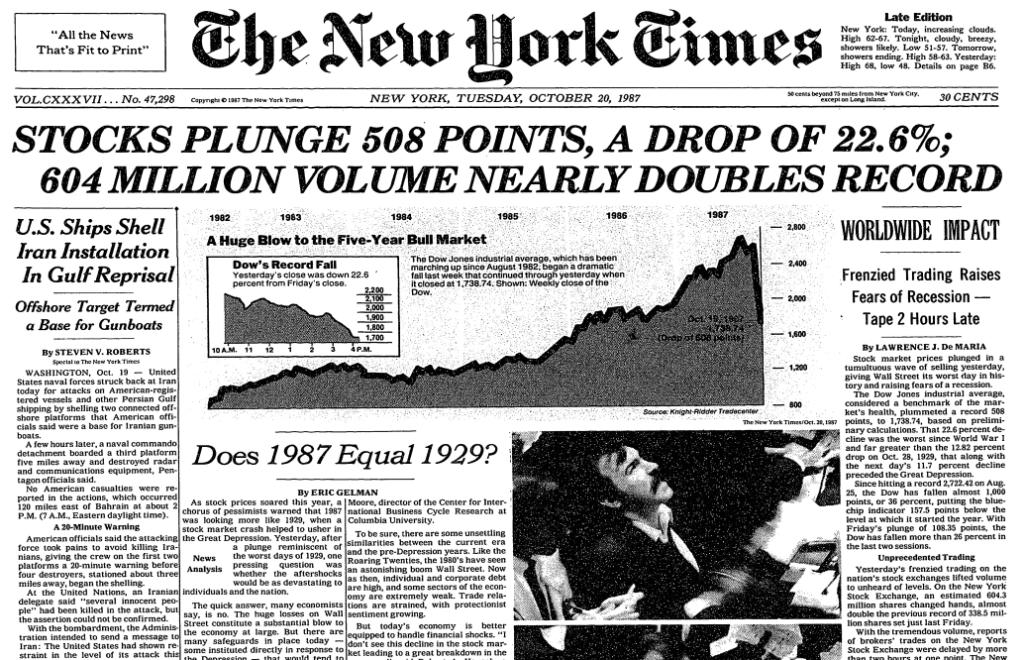 Learning from the history is good.

It is best to get a sense of the environment they were operating in then, and what actually went on. Every market draw down will be rather similar with human beings involved.

However, what ignites things, how long it lasts, and the authorities reaction would be different.

Adventures in Finance is a podcast that I subscribed to and this week they interview some of the managers and participants during that time to recount their experience.

You can listen to the episode above.

I took down some notes. I might gotten some facts wrong but if you are at all interested do read on.

The Environment before the 1987 Crash

After the Plaza Accord in 1985, there were signs of inflation.

Foreigners was afraid that the Fed, lead by Paul Volcker was behind the curve. The USD showed weakness due to this.

The stock market however, ignored these signs.

The volatility in international markets, have been picking up.

Low Volatility and Little Sell Down Made the Problem Worse

The thinking in their minds is that some of them based it on maths, if they rallied 61% back the draw down, they are going to get out.

The volatility was unprecedented , to trade around the market was very difficult.

One momentum trader’s system saw the weakness 1 week before, but there was no signs of the magnitude of the drawdown. Shorts was systematically positioned.

It is not easy shorting as well.

It is quite stressful when he has power of attorney over their position.

On the day before there was a big draw down, and then there was a rally up back to the point where the draw down started.

He covered his position.

When the market ended at the new lows, he knew something was amiss and put out more short positions.

On the actual day, the money went down massively.

Although he made money, he was so stressed up that he closed his position in the morning after the initial plunge, then went for a walk. Had he held on his position the profits would have been enormous.

But such was the stressed they faced.

When asked about whether there will be a trading halt, the speaker was not very clear whether it will happen. Due to that, buyers don’t dare to buy and it makes sellers even more anxious.

People seem to be experiencing “a moving dream sequence” in which they question whether they can actually sell at this ridiculous price.

The traders was wondering if they would STILL be coming back to the exchange to trade the next day, or whether someone had made an error that caused this avalanche.

After a 22% one day sell off, the market do what market does, rebound strongly to fool the maximum number of people possible the next day. But the prices started rolling over again.

A short time before, the major banks went around to solicit the specialists and market makers to allow them to borrow a lines of credit for the market making. When the banks saw the market had plunged, the representatives to the market makers was instead replaced by the chairmen of the banks.

The chairmen of the banks proceed to shut down the lines of credit. This is because while they are pretty sure the specialists and market makers will stand up for the stocks that they bought and sold, the major banks were not sure if their counter party will stand up for what they sold. So the line of credit was shut down.

They then indicate that they have to shut down the exchange because they do not have margins to make the market.

Greenspan Injected his First Does of Liquidity…. Before he Even took Office

Alan Greenspan was appointed but not in office.  Greenspan push in liquidity to the market. And as we observe, this is not the first time he does this.

New York Fed knew what happen and had to persuaded/force the major banks to open the credit lines.

The markets rallied again. And a major financial disaster was averted.

Portfolio Insurance: There was still human being in the mechanical loop. Do you trust the system or do you intervene?

The situation could have been worse if the portfolio insurance mechanism was automated. There was still a human in the loop who was overseeing the transactions and they seem to halt some of the futures selling because they anticipated that if they continue to do this, the market will go to zero.

Our question is based on how A.I operates, which is essentially learning by playing a game over and over again, would an A.I execute until they see a poor outcome (DOW and S&P500 at zero) before they tweak their course of action?

David Hay says there are parallels to the portfolio insurance that took the main stage during that 1987 crash. There is the interplay between the trading and portfolio insurance. The similarity occurs in the shorting of the VIX, the index which indicates volatility in the market. This shorting of the VIX is sensitive to the metrics that calculates the VAR or value at risk. So if there is a spike in volatility, how much of what to buy and sell, would be adjusted. This might set for a chain reaction.

Without the portfolio insurance, we might be safer from these one day event.

The system is more intricate and brittle, it could be the VIX shorting, naked shorts and passive investing inter playing with each other.

This is bothering on what Kyith knows as unknown unknowns. No one know what they do not know now. You will only know it when things happen.

For the low cost ETFs, or ETFs in general, the same situation will bring the ETF into discount to their NAV. Based on the same situation, there will not be specialists or market makers to make the ETF and the underlying stocks to transact at reasonable bids.

They will be buying discounted ETFs and selling S&P futures. This is a mechanized trading system to arbitrage a situation where the ETF value is discounted.  If they failed to sell the S&P futures they could sell the FANG stocks, which stands for Facebook, Amazon, Netflix and Google.

Some of those who have seen this think this might at most be a more sanguine situation. Most people will think this is a hard wobble, a 5-10% fall and a buying opportunity. He doesn’t see a topping situation in 2017, and it depends on whether there is a break in momentum (probably indicating his slant) which should set up for a harder crash in 2018.

The macro environment is much more worse than in 1987.

While many have turn their attention of possible distressed to the banks, one person do point out that a strong possibility would be the reaction by the state pension plans.

How can we Factor This into Our Portfolio Management?

One person cites that you need to have a robust portfolio. By robust, he means that when setting your portfolio today, you have to think about the expected return at this juncture and whether you are going all in on one side. A robust portfolio is likely one that is made up of components that are truly low in correlations that have factored in tail risk scenarios.

Another person notes that they are de-risking their portfolio the past few years. The thought process is that you have made much of the money and while we do not know the end point, it does not make sense to risk a large part of your money for a small amount of performance.

It is also observed that the US treasury yield curve is rather flat and with the pull back in quantitative easing and tightening, it might force an inversion of the yield curve. There could be further liquidity events. What was observed prior to the 1987 crash was that the yield was being revved up a fair bit in a short amount of time.

To put out shorts to protect can be particularly dangerous because of the numerous interruptions the authorities can do. The big money can be made on observing the market’s interpretation of the measures being put out, whether they are effective or not effective.

For guidance, look to the bond markets and the central bankers.

Hi Kyith, I can still vaguely remember 1987. I had just started to tiptoe myself into the stock markets. I was shocked and paralyzed in view of the speed of that downturn. I did nothing but watch it happen. Luckily that time my investments were very small. Not due to my cautiousness just due to my lack of capital.

Nevertheless having had skin in the game, having had money on the line always goes a long way to stimulate my learning. Sometimes you win. Sometimes you learn. And whether I learnt enough from it to apply for the next downturn? Only time will tell.

And for your younger readers I have this to share: Invest as much and as early as you can. The greatest risk of all is to not take risks and learn from mistakes while you’re young.

I guarantee you the older you get, the bigger the mistakes. As I learnt from the age-experienced, it's always our own choice to try to run our life on Regret-Minimization.

Hi Tacomob! thats a great share from someone who has been in this longer. You are right. as your capital grow, your margin of error is much less now. If we want to make the mistakes, do it when we are young.