So we know that you have a Philips Share Builder plan from Philips Securities, which essentially lets investors dollar cost average into certain Singapore blue chip stocks.

Now this plan is good in that

Now note you can stop your DCA anytime. Which bring us to this article.

I have a relative who likes this form of structured investing or investing based on a portfolio manner. The worst thing I did was to seduce him into the benefits in investing in telcos such as Starhub and Singtel.

So we know the market hasn’t done very well recently and my relative, being a student of economics sees that there are just too much troubles out there.

The best time to invest is when the trouble clears.

So he was DCA into Singtel all this while after my persistent advocation but recently I understand he have stop DCA. The reason?

It is stupid to DCA when the trend is going down

Now this is interesting for me because there is no correct or wrong answer here. 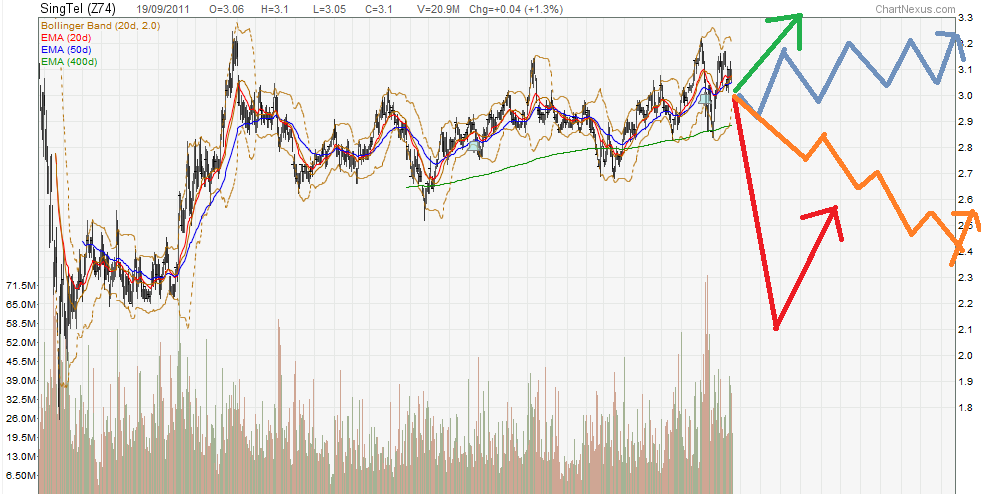 We have a DCA candidate here that have a strong utility like business model. It is unlikely to falter as in a recession, your handphone is your business and communication asset. You will still need this service.

Though profits may be affected, they are unlikely to go bust anytime soon. Lack of business will actually bring down capital expenditure.

Price is not far off from bottom

The lowest price reached, discounting the spike at the end of 2009 recession was $2.30. That is a maximum of 25% drawdown

What are the likely scenarios

What is my take on this

What do you guys think?