We know its been mentioned that this recession is gonna be bad. so bad that it is gonna rival the depressioin in 1929. So its abit of a contrarian to revisit some media posts in 1990 to see the similarity to what we are facing now: 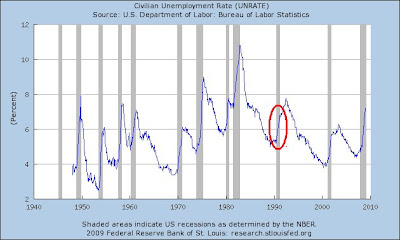 The July 1990 to March 1991 recession was one of the shortest in U.S. history (8 months according to the NBER) and relatively mild: the jobless rate averaged only 6.1% during the recession and reached a high of only 6.8% by the end of the recession (although it continued to rise after the recession ended, see chart above).
“In 1991 the average American expressed more pessimism about the future than at any time since the Great Depression.”

“There is no question but this is the worst economic time since the Great Depression.

“Sluggish economic growth this year will cap the worst three-year period centered on a recession since the Great Depression.”

“Forecasts for a weak recovery in 1992 suggest the period since 1990 will be the worst for the economy since the Great Depression.”

…..the worst plunge since the Great Depression.

“The banking industry has plunged to its lowest point since the Great Depression.”

“This is the most severe economic dislocation we’ve had since the 1930s. Few are immune.”

“Mr. Barry, a past president of the Chamber of Commerce, said 50 For Sale signs are just the tip of the iceberg, since many bank foreclosures and repossessions do not carry signs. “It’s not a recession, it’s a depression,” he said.”

.with the US economy locked in a recession and more people out of work since the Great Depression.

“….the worst (retail) sales period on record since the Great Depression.”

“This recession is hitting white-collar workers more heavily than any since the Great Depression of the 1930s.”