Applied Materials, which drives greater than 90% of UMS Holdings revenue, acquired Tokyo Electron in the largest deal in Japan in 6 years.

With this, Applied Materials have potentially removed much competition in the market.

Analysts also said that antitrust issues could be a concern for Applied Materials and Tokyo Electron, given that the deal would combine two of the three largest players in the industry. At a news conference in Tokyo, executives insisted that the two companies’ capabilities were complementary, rather than overlapping – NYT 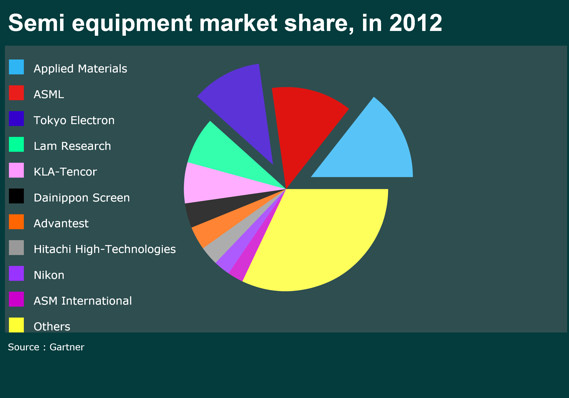 Acquisitions can be generative in that, in such a field where research and development, being able to deliver the most technologically advance solution to their foundry clients give them a great advantage.

Synergy in the form  of streamlining operations, cutting or combining less value operations is also possible.

In any case it increases the monopoly power of Applied materials possibly. They would outright acquire pipeline technology research, good engineers that could value add over competitors.

Moore’s Law enabled chip makers to roughly double the number of transistors they’ve been able to put on an integrated circuit. This made it possible for chip companies to make more powerful processors, but also has required more sophisticated manufacturing equipment. Applied and Tokyo Electron will be in a stronger position to take on technological hurdles as a merged company. – Market Watch

AMAT have become a probable cash flow generative investment target for the next 5 years.

For UMS this increases the risks, as with all this customer reorganization.

While I think Tokyo Electron may have their own subcontractors or does precision engineering  in house, it is not cost effective to do it in Singapore or Penang. It is likely that will remain separate.

If it is done in-house, the relationship with AMAT might mean UMS in the position to acquire any related Tokyo Electron  team in Japan.

It could also mean the other way round.

“When we looked at Tokyo Electron’s supply chain, in the past and currently, it’s very high quality suppliers and we looked at the Applied supply chain, very diverse base of suppliers. So, we think combining the two of those got a lot of opportunities in time, cost and quality.” The merged company also would have more leeway in terms of pricing, Sanganeria added. Johnson of Gartner said the new entity would have “tremendous leverage.”

Or it could be worse. UMS might lose this major contributor.

Very much depend on whether Tokyo Electron have a vastly superior product than Endura, which is what UMS supplied to AMAT.