This morning as I was scanning through my feeds, I have been flooded by some startling numbers from Apple. Basically it was the second most profitable quarter for any company, trailing only Exxon Mobil’s record quarter in 2008 due to the oil price surge.

Now the crazy thing about Apple is that it started off the quarter as a megacap, juggling position with Exxon Mobil as the largest stock in the world by market capitalization. The amazing thing is that its growth rate may still be able to accelerate.

The recent initiatives to move into textbooks on iBook shows that they are building a platform ecosystems that transcends technology into a way of life.

The obnoxious thing is that it’s a closed ecosystem that Google does not want it to be.

As one tech commentator Gina Trapani says, “I prefer Google’s values over their products, and Apple’s products over their values. When either are compromised, we should worry”

Here are some crazy things about Apple

Basically the quarter was enhance greatly by a climbed in iPhone 4S. It vindicates the last poor quarter that people are really waiting for iPhone 5.

More growth figures. For a megacap that is a crazy growth rate. The game has changed really, they are building an ecosystem that is mixing and meshing and giving you the iLifestyle that will just keep feeding itself! Its closed but it works!

Now we know that tech companies based on intellectual properties have lots of cash. Oracle, Microsoft, Cisco have shit loads of it. 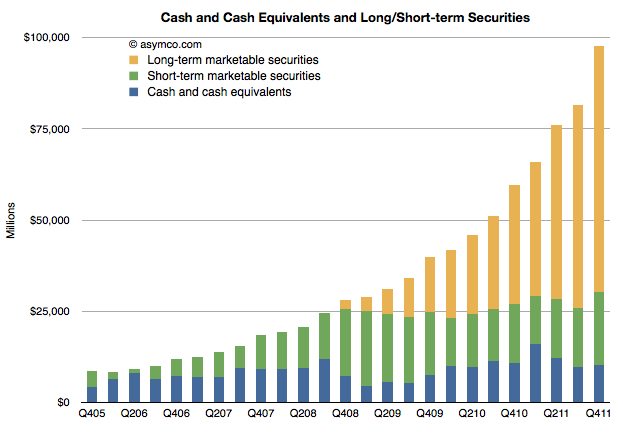 Well, Apple added 38 billion out of their total 97 billion last year! How much is 97 billion? Enough to buy 474 of the S&P500 companies! Only 52 other stocks worldwide cannot be bought by that cash holding!

What I would really like to tap your brains is given this closed and integrated platform/network/ecosystem that feeds itself, how can the rest stop it?

Does the latest financial results include iPhone sales in China? Apple only recently started selling iPhones in China, and the demand for it is really huge, judging from the news articles about people queueing up for it in Shanghai and Beijing.

And for the textbook initiative, I don't think it will be successful in Asia, where textbooks are selling at much cheaper prices than in US.

The next big thing for Apple will probably be the TV segment. Imagine it being as successful as the iPhone, and every household having at least one of it. Woah.

hi James, China could really be the final frontier for the iPhone and iPad. whatever Apple spew out people will buy. That is the feel. The worse place for this is Singapore really.

@ Drizzt I would be the first to admit not knowing whether Apple has the ability to consistently repeat its stupendous growth rate. Just looking at the potential negative side of the story, which I believe is a good trait to have when looking at value.

Here's an interesting story that I came across.

thanks shan rui, the problem in china have been known for sometime. unfortunately Apple ain't very high in that ethical department sometimes.

But it's current P/E ratio is already super low to begin with so even when it reverts to the mean growth, it is still a super buy.

hi Jeff, interesting single PE. i have not check that up but if its true.... its a bargain.

The "law of large numbers" supports reversion to mean. As to the question of what mean, we can look at the long term growth rate of IT firms as an indication. Perhaps high single digit, but this could be 3 years down the road (you guess is as good as mine...)

Despite the impressive growth of Apple's revenue numbers, I would point out that 50% of its revenue is tied to one product which exposes it to high concentration risk. Technology trends are notoriously difficult to forecast, so who knows what the future will bring? In addition, the iPad has a lower margin than the iPhone. So even if customers move up the product chain, future revenue growth may not be as rosy.

Of cuz, Apple may surprise with another innovative new product that scores another home run. That remains to be seen.

hi Addy, its interesting u mentioned their exponential growth is due to one product. another perspective: we all buy a smartphone because it replaces our identity or wallet. would another product be so sensible every one would acquire it?