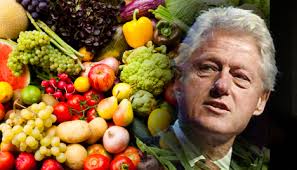 We talk about building wealth requires you to first make a decision to do it but not just that make it your personal project.

Success rate will be higher.

Bill Clinton had to kick his eating binge for unhealthy food if not he would not live for long. That is his doctor’s advice. [Huffington Post]

But he managed to become a vegan.

I know many friends who would never imagine themselves being a vegan.

Usually they would, when it becomes too late for them.

What I find interesting about Clinton’s quote was this:

"The main thing that was hard for me actually — much harder than giving up meat, turkey, chicken and fish — was giving up yogurt and hard cheese," the former president said.

Clinton said he "would keep a record of everything I ate every day — what, when and how much."

Apparently, he wants it bad enough, such that it becomes his personal project.

How bad do you want to be healthy or financially stable?