The traditional narrative seems to be that in a rising interest rate environment, commodities and hard metals are the last to run. Bonds would be highly unfavourable especially in the narrative that the FED and other central banks have been irresponsibly printing money and creating inflation that cannot be measured by reported metrics.

Bonds are the worse instruments, since if you own bonds, you can only get a a coupon yield of 3% while newly issued coupon bonds can reach as high as 8%. Your purchasing power will be eroded.

Mark Hulbert have a good piece that provides some different perspective:

What steps should you take in your portfolio if you think inflation is about to heat up? Erb acknowledges that there isn’t a great short-term inflation hedge. But he says that intermediate-term government bond funds should largely hold their own when inflation and interest rates rise, since they can reinvest in higher-yielding issues as their older bonds mature, thereby absorbing the losses of principal caused by those higher yields.

Erb points to the surprising resilience from 1966 through 1981 of intermediate-term U.S. government bonds — those with five-year maturities. This 16-year period is often considered the worst environment in recent history for bond investors, since intermediate Treasury yields nearly tripled. Nevertheless, according to Ibbotson Associates data, these bonds produced a 5.8% annualized return over the period.

The most popular intermediate-term bond fund, among those advisers monitored by the Hulbert Financial Digest who have beaten the S&P 500 over the past 15 years, is the Vanguard Intermediate-Term Investment-Grade Fund VFICX +0.10% , which charges annual fees of 0.20%, or $20 per $10,000 invested.

The fund’s current yield is 2.6%, and its average effective duration of the bonds it owns is 5.2 years. (“Duration” is a measure of sensitivity to interest-rate fluctuations; a lower duration implies less sensitivity.)

Notice that Erb was talking about bond funds, not a single bond. The solution provided by planners for a rising rate environment is to set up a bond ladder, which is somewhat similar to what these Bond funds are trying to do.

A good reading to accompany this would also be a passed article titled Will you lose money on a bond ETF in a rising rate environment? 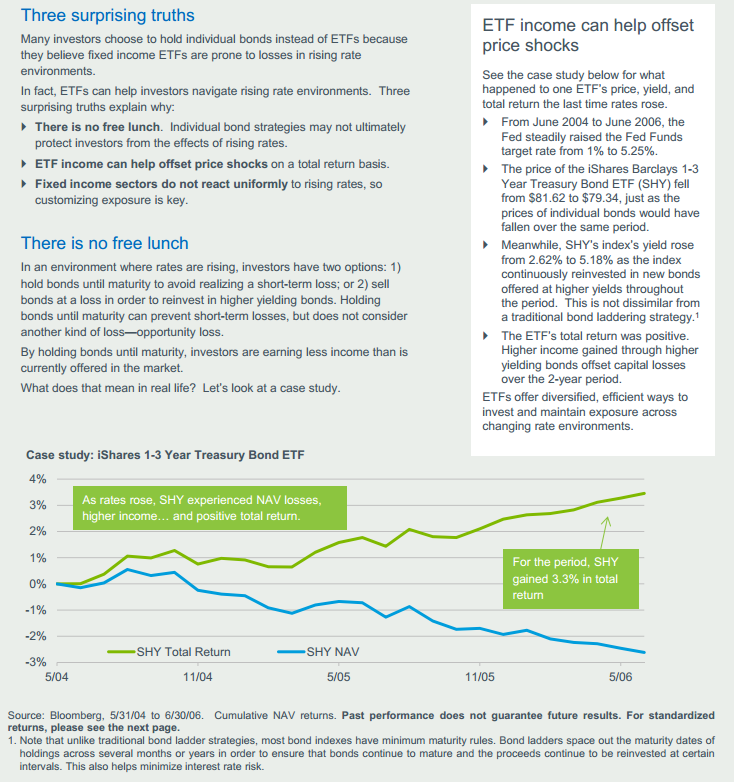 If you enjoy this series, do visit Mental Blocks, Doomsday Scenarios and Misinterpretations that kill your Wealth where we share other common interpretations.