I have been doing a few of these exercises on the blog which might prove useful for some of the dividend investors reading this blog.

The reflections that can be gathered here today are:

Frasers Commercial Trust (FCOT) didn’t start out as a REIT that belong to Frasers. It started life in 2006 as Allco Commercial REIT, then owned 17.7% by Australian based sponsor Allco Finance Group.

Shortly after, the great financial crisis hit, and one of the main risks that many professional managers didn’t anticipate the magnitude that could affect their portfolio was credit risk, where the whole financial system is short of money. There were no one willing to lend money.

REITs whose life blood is credit availability, didn’t anticipate a low probability risk actually surfacing in a big way, and smaller REITs like Allco without strong backing had a problem.

However, the REIT’s problem soon surfaced in that several of its own lenders refuse to participate to refinance S$550 mil in loans. They were downgraded twice by rating agency Moody’s. They eventually managed to secure financing.

Interestingly, during that time FCL managed to get approval to list their own commercial REIT. However, with this purchase, they have a platform to add their current properties to it. The REIT was renamed as FCOT.

During that period, there were 2 rights issues to shore up the balance sheet, but also to inject properties into the REIT.

At one point, for the July 2009 rights issue, Alexandra Technopark was purchased, a $342 mil perpetual preferred equity was issued to the seller of the Technopark and a 3 FOR 1 (not 1 for 3!) rights issue at 9 cents or 60% discount to last traded price. This is a big recapitalization exercise to bring down the debt to asset leverage from 58% to 38% with a normal equity and a debt like equity (perpetual preferred).

The new FCOT management team worked their magic to reconfigure the REIT.

There were some deals that showed what was good management decision including selling Keypoint (read my coverage here), which made up 10% of NPI, at a profit from purchase cost and using the money to purchase the 50% of Caroline Chisholm that they do not own. Caroline was leased to the local government for 13 years.

The purchase price was lower than the price of the 50% stake they currently own. The impressive thing was they sold Keypoint for $360 mil losing $10 mil in NPI and bought something for $113 mil that gives them $10 mil in NPI. 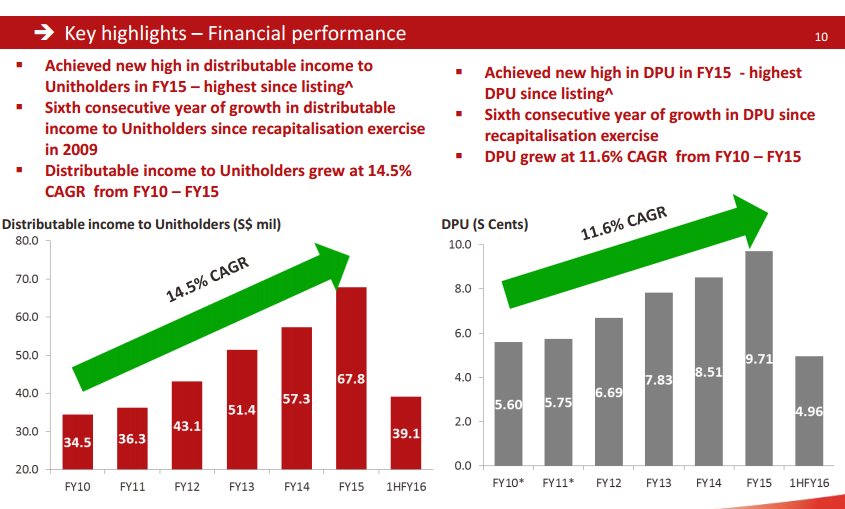 Since they took over, in a period of rather flat office rents, they been controlling their gearing, yet raising the dividend per unit for the shareholders.

FCOT can be said as an example of a tale of 2 very different management.

For the simulation, i want to capture a period of transition, where an investor’s investment will go though the bad times and the good times.

We want to compute the internal rate of return or XIRR, which is the rate of return you will get yearly, if the net present value of your future cash flows is zero today.

XIRR allows you to have a common grounds of comparison with other REITs, other investments such as stocks, properties, insurance savings plan and fixed deposits 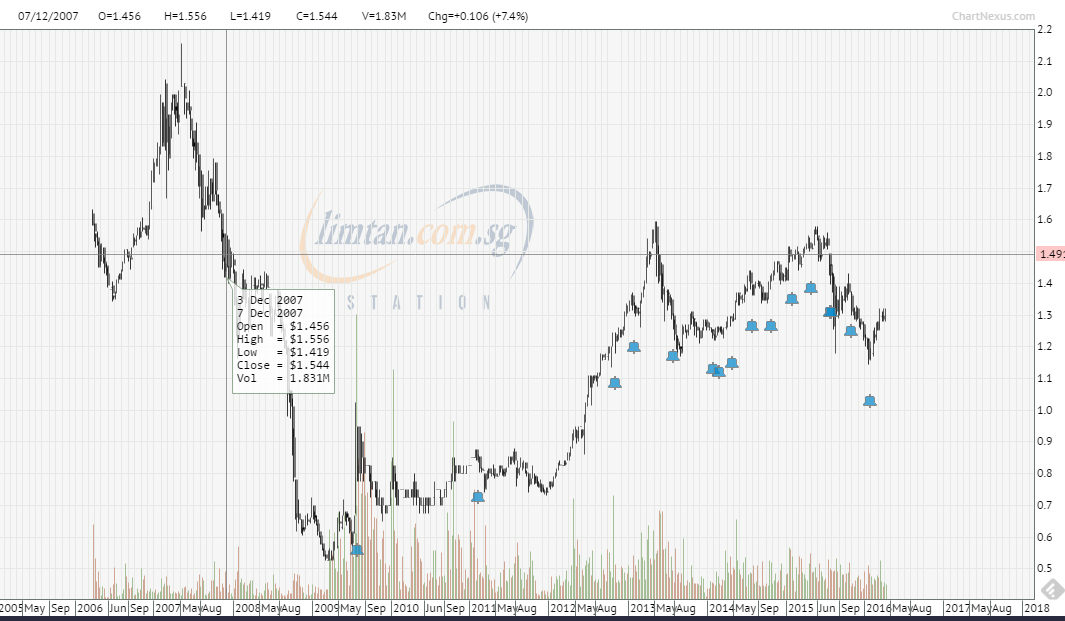 I have 2 price chart here showing the period, and they are rather tainted in that there was a reverse share split in 8th Feb 2011. I tend to trust the chart from Yahoo (below) better in that it shows the extend of how much price has fallen.

The first simulation tries to war game the scenario where an investor puts in for example, a lump sum of $100,000 of his or her wealth into FCOT. How would his or her return look like?

If we take that the first day the investor puts in his money to be 3rd Dec 2007, he will have to support FCOT in 2 rights issues. If he doesn’t subscribe to the rights issue, he can sell off his right, though it will depend on how much people are willing to pay for the rights.

In summary, if the investor buys 1000 units at the traded price of $0.90 these are the following addition rights issue commitment and share split: 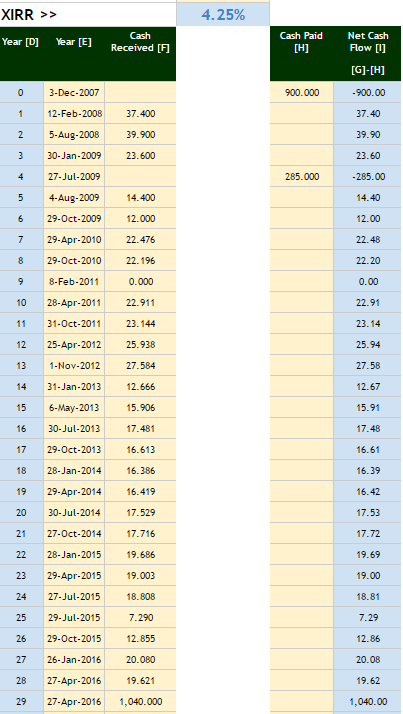 The internal rate of return or XIRR for the stream of cash flow is 4.25%.

A large part of the recovery have to be due to subscribing the rights at such a heavy discount, and also FCOT management doing a very good job.

If you take a look at their yield on cost over time:

They been creating much DPU growth without a rights issue after Feb 2010 and controlling their net debt to asset from 58% to current 35%.

The XIRR of an FCOT lump sum investment look much better than the results of Ascendas India Trust. Certainly, 4.25% after all the early turmoil looks very good in my opinion.

Still if you have only focused competency in REITs, you did not lose money on this investment, and barely kept up with inflation.

The second simulation wargame the scenario that the investor treats this REIT like an insurance savings endowment by putting in smaller amounts.

Instead of contributing monthly. he or she can save up $12,000/yr and contribute at a fixed time.

We simulate a $12,000 wealth contribution and a $30 commission each time every 1st of Dec of the year, over the same period.

In total the investor will make 9 yearly contribution.

The internal rate of return or XIRR for the stream of cash flow is 14.48%.

The XIRR compared to lump sum at the start of the period look very good because by DCA, the investor taken advantage of the market volatility to accumulate price at more distributed prices. He or she avoided the risk of a capital impairment that the lump sum investor could not avoid.

Here are the prices he would have accumulated at adjusted for the stock split:

The end result is still a happy ending in this case.

Let’s do a recap. At the start, we hope that we can have a few reflections:

1. Whether you will lose money by investing in a REIT near the GFC high

In the case of FCOT, the investor endure much pain if he invest with a lump sum, participate in some rights issue that he may hope will eventually work out. Eventually, things turned out ok.

This is because the company taking over, knows what they are doing.

2. The difference in returns when you put in a lump sum and dollar cost average equal amounts into a single REIT

DCA prevents you from putting all your capital at an all time high, so that the investment do not look as good.

If we are talking about REITs or stocks that are at the start of their growth and you decide to DCA, your result will pale versus that of lump sum investing.

While in 1 year there are much gyrations, you might not need to participate in all of it. I always get questions asking if I can put in $1500 per month into one single REIT. If you want to optimize your commission, accumulate and invest half yearly or annually.

Over 10 years that is still DCA.

3. The importance of good management

FCOT turned around because you have someone who can come to grips with a challenging scenario and have the experience to navigate it.

I cannot stress the importance of this. The economy will from time to time be poor, there will be credit tightening, there will be opportunities and periods of overvaluation.

If the manager is good, they would make more good decisions that are good to shareholders then bad. If you have a poor manager, or a misaligned one, you will feel the brunt of these events more.

4. The effect of major rights issue on your dollar cost average plan for a REIT

There will be times when some manager takes excessive leverage, or even if they are prudent, macro events such as GFC will put the REIT in a position where there needs to be a rights issue.

In these 2 simulations you can see the effect if you do not have the capital to subscribe to a 3 for 1 rights issue.

This makes me think that, if you concentrate in smaller REITs, you need to have enough capital to be ready for such events.

The past rate of return review of REITs can be viewed here: