I went for a three week reservist training not too long ago and as I usually do not buy the Straits Times I took a look at it. The content is largely the same. The surprising thing was how thin the classified section was. Full page ads still look pretty well taken up.

I asked around and seems like no one orders newspapers at home any more. But it is somewhat surprising that circulation figures published by SPH remains strong. 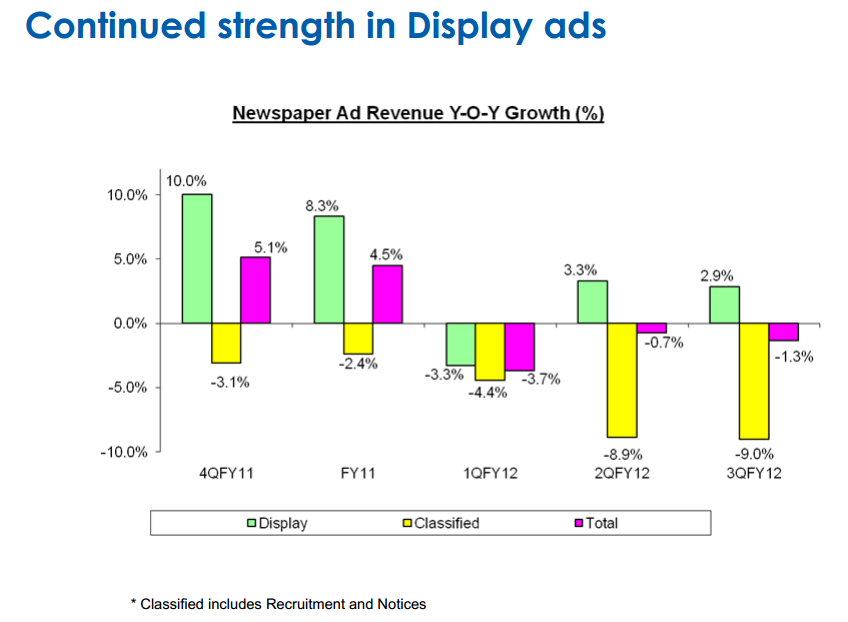 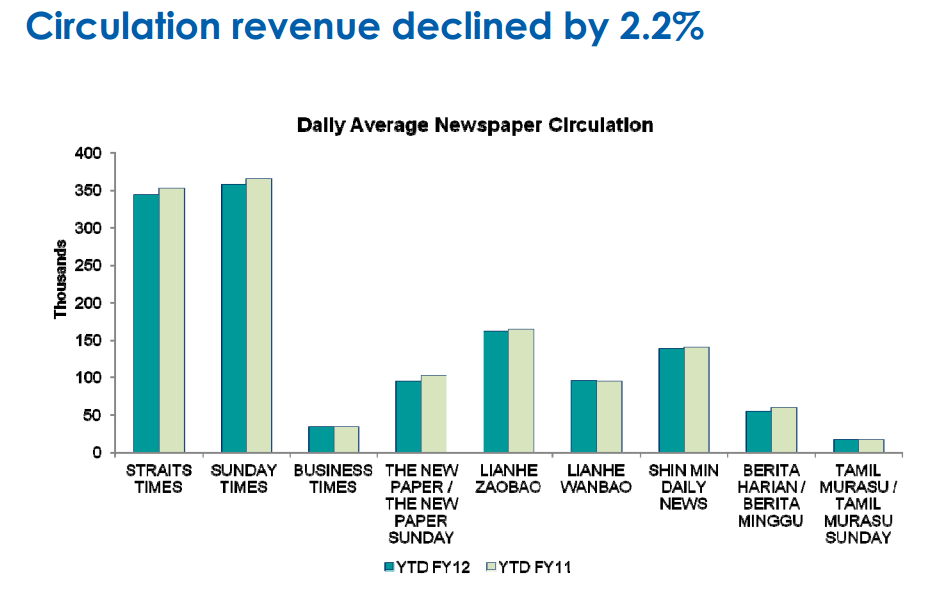 Perhaps I didn’t pay enough attention to the figures as I suppose to. Classified section have shown a dramatic QOQ fall. It used to be that if you would like to sell cars, find jobs you have to use the papers because that is the most prevalent media.

Now its different. Singapore is one of the country whose population spends the most time online. Online job sites, free classifieds like Hardwarezone to buy and sell things and SgCarMart provide better alternatives.

SgCarMart charges $48 for a front page space to list your car for 6 days compare to $36 per day on a weekend classified listing.

The puzzling thing for me is if everyone I talked to are not subscribing to it, why is the circulation still so high. Perhaps it’s the trend that people prefer to buy it off newsstand.

Should the circulation trend continues to go down to a much lower terminal rate, advertisers will re-evaluate whether print media reaches their target audience effectively for the amount they pay for it. Other media sources could be more effective per unit cost.

Revenue is likely to trend down base on economics. I still don’t see it being affected in a big way.

SPH online media strategy is to capture all the popular eyeballs and be in the face of internet users. If there is a new startup garnering a lot of eyeballs, they will acquire it like Hardwarezone, if there is a lack of demand they will create it.

They sell advertisement space on these new media. However, the dynamics of the economics of online information space is different from last time. In the old days, information sources are scarce. Its either the TV, newspaper or bill boards.

Still local news is where SPH has a niche. But so do Mediacorp, which is owned by Temasek and they readily offer it through Channel News Asia for free rather than behind a paywall (Straits Times and Business Times online are subscription based)

Singaporeans are a strange bunch. They have a tendency not to spend on digital goods compare to physical ones.

They will need their news on their smartphones, but the usage pattern is also one that people need to consider. A group of people like to have papers so that they can occupy their journey to and from work.

Now that Singapore have become so congested its not feasible to hold on to large newspapers.

News apps to commuters is a way to keep up with latest news. But not many would value a detail coverage. They may like to know what actually happen rather than well thought out editorial, which you need good journalist for. In such a scenario, channel news asia serve its purpose,

This would mean people not opting for paywall based local news.

The advertisement revenue for digital space is also lower so all this means is that unless the Singapore folks value good local news, SPH will find it hard to totally replace print media.

Right now, these online media ventures are reflected in the Annual reports or financial statements as Others, which is losing money for a few years.

SPH essentially look at them as some form of insurance hedge but doesn’t develop them as an income stream. I wonder if this is the right strategy to take.

To compound to the two points mentioned before, the largest part of the cost for SPH have been staff cost, which accounts for 41% of total cost.

With wage inflation rampant, this component have been rising due to increase in headcounts and better payout to retain quality staff.

Revenue trend is falling, major cost is rising. Not a good picture.

I was told by my friend that there were thoughts that SPH may want to sell of their Paragon Shopping Center. Looks like they make a wise decision not to.

SPH in the past two years have sought to prepare for slowing news media income segment by building up a retail rental business.

They acquired Clementi Mall at a crazy premium.

Since SPH was originally not leverage, they can leverage up to increase their income stream. I originally like the idea that unlike a REIT, they would have the flexibility to pare down the loans using their excess income.

But I realize that even with this new leverage segment, they are barely keeping up to pay their dividends.

Paragon and Clementi Mall are likely to contribute $100 mil to their cash flow which can be used to pay their $0.24 dividend, which requires $383 mil. Even with Seletar Mall coming online in 2015, that should contribute another $30 mil at a 5.5% Cap Rate.

SPH will continue to create more malls, but it only serves to make up for loss newspaper income stream.

Warren Buffett was in the news a few months ago and also these few days telling the media he has been and will continue to buy newspapers.

“These are smaller newspapers generally. Newspapers used to be primary virtually everything. They have lost their primacy in many areas. If you lived in Nebraska and you are interested in at Nebraska football or your high school and what is going on with your neighbors, you are only going to find it in the independent papers. The smaller paper is still primary to many areas of interest.”

He also gives his take on whether he will buy newspaper corporations:

“I would rather buy newspapers myself directly…I like buying individual papers at the right price. The prices should be low because their revenues are going to decline over time. We are not buying into a business where revenues are going to increase. We have to buy them at the right price. We have to buy papers that are subject to less erosion because they have lost their primacy.”

Essentially, what he see is that upside is capped and the price you pay for it is important. He sees that he can get reasonable value since these news corporation wants to sell away these papers on the cheap.

Back to SPH. If you look at SPH as two publishing unit, the local and non local news, what they provide can be something that Buffett describes. In that context, There will always be a group that wants their news in physical paper form and are willing to pay for it.

However, the internet penetration I feel, seem to point to a more internet, smart devices and TV centric news consumption and it points to Channel News Asia being a bigger competitor in the future.

I see SPH as a bond like equity. When you assess this bond you look at the reward for the risk borne. As a media shop they are not going to go away, but a poorer business model means that this bond have no clear room for future growth.

Free cash flow is maintaining at 380-400 by new property income stream. However the difference is that it is maintained by additional leverage.

With a price earnings of 17 times and EV/EBITDA of 11 times, it seems to be value more like a fair stock but a great return on asset like IBM or ARA Asset Management.

Yet the problem is that its future return on asset looks to be much weaker.

Yield chasers would have to beware and not buy this at a dear price.