One aspect of wealth planning that I am always fascinated with is the question whether the protection scheme planned out by our government are able to comfortably offset medical costs that comes along our way.

I recently got to know one of my friend who happen to be admitted to a hospital for a surgery and was willing to share with me her experience.

She (mid 30s) was suffering from thigh pain for a long time, which affected her sleep as it grew worse when she lie down. When the pain went past the threshold, she finally decide to do an MRI at Raffles Hospital. The diagnosis is that a tumour was found compressing her spinal nerves.

She needed an operation to remove it.

The operation was a success. It was a difficult surgery but she came out of it retaining all her functions.The doctor managed to remove almost all the tumour without damaging her nerves. There was a bit of tumour left but the tumours would likely die when the blood supply is cut off from them.

She was able to finally sleep peacefully at night.

Instead of paying the $8000 with cash, she was able to use her Medisave to pay the amount.

The private hospital and surgical plan together with the Medisave savings worked out very well here to limit the cash required from take home income.

She still have to do a yearly MRI test, to be sure the tumour do not grow back.  It is these outpatient treatments that may end up costing more out of pocket money. Each MRI scan  will cost between $1,300 to $1,400. The cost is high because it is private. A comparable government hospital charge is around $800.

Her pre-surgery outpatient costs was covered by her company. These include specialist consultation, MRI and MRI review. I find that not many would have a good company coverage that is able to offset a large part of the outpatient costs.

Hospital and surgical plans in general tackles the hospitalization and surgical well but when it comes to outpatient costs, they do not work so well. If you suffer from complications, you have to not only feel the morale drain but also some of these high costs if the company doesn’t cover you well.

She didn’t know Medisave can be used

Not many of us read up these medical stuff to prepare ourselves for these disaster. I don’t, so does my friend. it is really a big sigh of relieve that majority of the residual costs can be paid by a business.

The impotence of Health check-up and prevention

One of the negative reflections we had was that, despite being careful in what she eats day to day and having a check up not too long ago from the period where these things happen, the problem couldn’t be prevented and isolated. She was telling the doctor that she feels so much pain, yet the doctor was unable to diagnose anything.

It is only when things get really out of hand that, the doctor push for something more.

If early diagnosis is a key factor in resolving these health complications successfully then most doctors would failed helping her or cases in a similar situation.

More of these cases seem to point to the fact that genetics matter more to whether we are susceptible to these problems then proper exercise and nutrition can help alleviate.

The importance of having Emergency Funds

My friend’s situation reminds me how important to have adequate liquid money that you can call upon in this time of need. This is more so for outpatient treatment, the various number of tests and consultations that need to be performed before and after the ‘main event’.

For my friend, she is fortunate in a way that  at 30++, she has adequate Medisave to tap. If a person gets hospitalized at 25 years old when he or she just started working, the Medisave might not have accumulate until $8000.

The worry thing is that I kept hearing my younger peers complaining that they do not have enough money to go for a particular holiday or they are waiting for their bonus to do something special. I shudder to think what would happen if something similar happen in the family.

Things do not have to be super bad to be an issue:

The common complain then would be that you cannot plan for such foreseen circumstances. You cannot prevent such situation from occurring, but you can PLAN TO ALLEVIATE THE SITUATION.

My friend’s bill is made up of 2 sections:

The private insurers like Great Eastern, Aviva, AIA, Prudential have come up with riders that, you pay an annual insurance cost and it reimbursed the deductible, the co-insurance or both.

For myself I have a rider that covers the co-insurance payment, or in Aviva’s case the Myshield Plus A 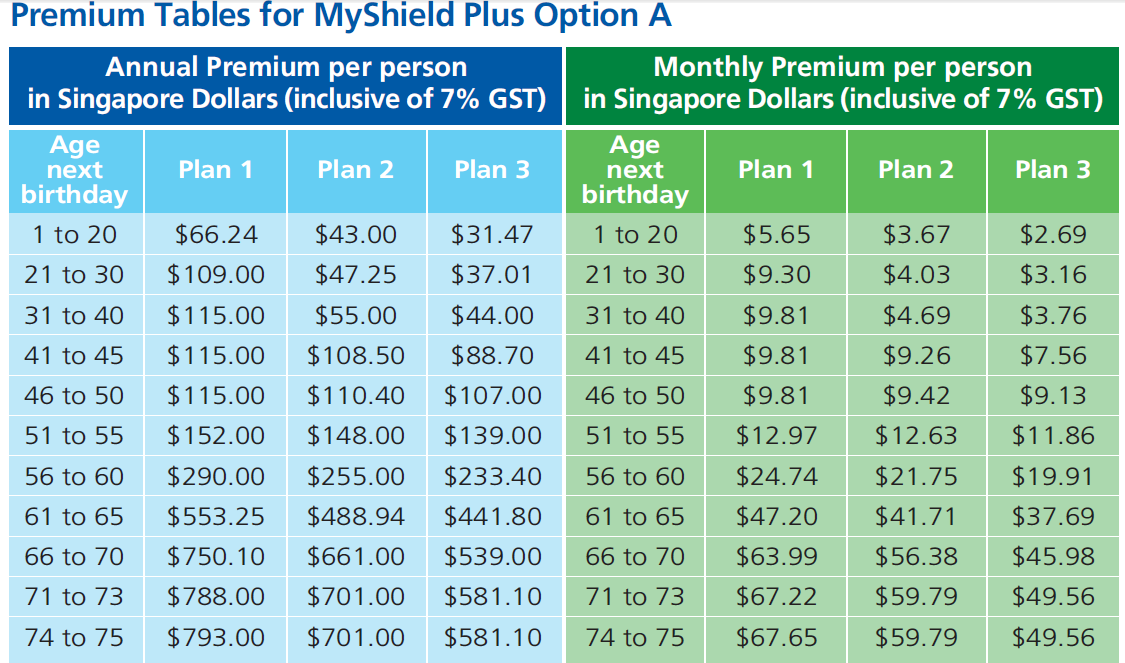 At the age of 25 to 40, the premiums are affordable for the large bill that we are insuring against. In the case of the $4500 co-insurance payment of my friend, the $100 per year payment (which you cannot pay with your CPF Medisave) you have to not suffer a similar case for 45 years for it to be un-lucrative.

However, I believe its because the insurance company know that it is unlikely that you are going to suffer many episodes of such hospitalization.

Take a look at the annual amount at 63 years old. The amount is large enough that you start question if it is worth it.

When we link back to the daily subsistence expenses of a retiree at 65 years old for CPF Life, insurance premiums like this should be considered as one of these.

I know folks that still stick to the idea of buying a total hospitalization plan that covers so that you pay zero dollars. To be able to do that, the plan is not going to be cheap and playing into the hands of the insurance company in terms of probability and impact on what you pay.

The idea of a hospitalization and surgical plan is to insured against large bills, and the way to think about it is to hedge your risk that if you suffer from something that the medical cost comes up to a large bill, you only have to pay a smaller proportion of it.

If you know that, then you know that given the choice you should buy the co-insurance portion rather than the deductible portion. Of course it is not going to be cheaper.

Would Medisave be enough at retirement?

I came out of these case study not feeling confident. My friend’s case can be what I considered an above average hospitalization. It is not the extreme probability and impact example that our shield plans are suppose to help us alleviate.

But our Medisave is limited. Even with my current Medisave amount of $48,000, 5 to 6 of these will wiped me out.

Much will depend on the ability for a couple’s Medisave to be pooled together but also the $48,000 to grow over time at 4% rate of return for CPF Medisave.

I emerge from this case study not confident that any of the tests that we routinely do will be good for early detection and also not confident a better wellness lifestyle is a key prevention element to such situation.

What about you guys? Do you have a similar story to share? Do email me at [email protected]ntmoats.com  so that readers can understand the real situation whether these medical schemes work well.

Present the following voucher when you purchase insurance from DIYInsurance and enjoy a $20 voucher complements from Investment Moats! 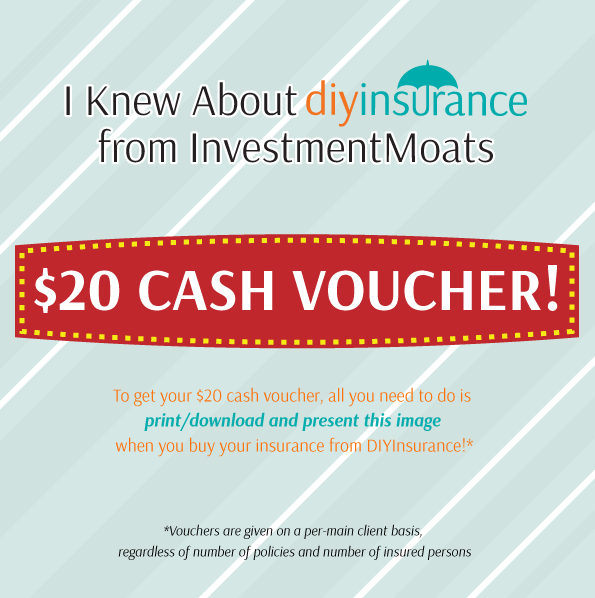